UK complicit in US economic terrorism against Iran: Zarif 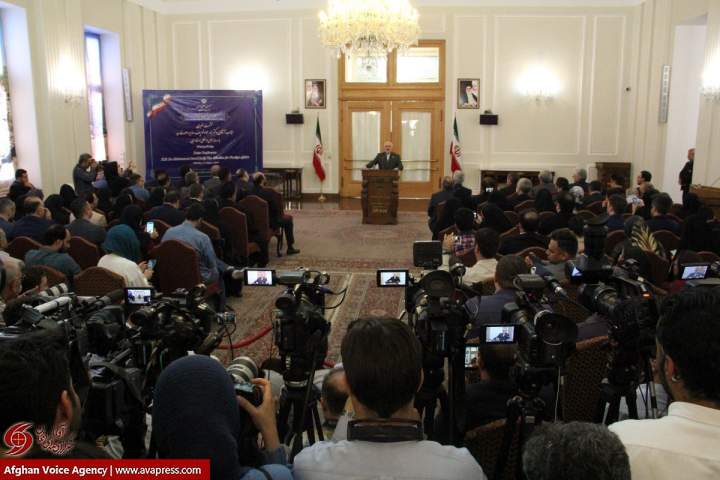 "The UK government has been complicit in the US’s economic terrorism against Iran," he told foreign and domestic reporters in Tehran on Monday.
The Iranian top diplomat was referring to British naval forces’ seizure of an Iranian-operated supertanker in the Strait of Gibraltar off Spain on July 4. The UK seized the vessel on the allegation that it was carrying Iranian oil to Syria in violation of the European Union’s unilateral sanctions on the Arab country.
Zarif repeated Tehran’s condemnation of the UK seizure as an act of "piracy." Iran has denied that the vessel was heading for Syria, and Spain later said that London had ordered the confiscation at the request of the United States.
Washington has been trying to hamper Iran’s international oil sales since leaving a multilateral nuclear agreement with the Islamic Republic and other countries last year and returning the sanctions that the deal had lifted.
“Economic terrorism is a reality today. It equals targeting ordinary people in the hope that they would implement your policies,” Zarif said.
Britain has dispatched three warships to the Persian Gulf after Iranian forces detained a UK-flagged tanker that had collided with an Iranian fishing boat in the Strait of Hormuz and refused to heed its distress calls afterwards.
The top diplomat reminded that the Persian Gulf's security is Iran's responsibility, and asserted that Iran will no longer turn a blind eye to "maritime offences" in the strategic waters.
Sanctioned after snubbing Trump?
Elsewhere in his remarks, Zarif said he had been recently sanctioned by the United States after turning down an invitation to the White House by US President Donald Trump."I was told in New York I would be sanctioned in two week unless I accepted that offer, which fortunately I did not," said the Iranian minister.
By imposing the boycott on him, Washington has closed the door to diplomacy, he said, noting, "Sanctioning a foreign minister means failure in talks.”
US isolated
Zarif said the era, when the discourse of superpowers and bullying would rule the world is over, Zarif said. “Today, the United States is alone in the world,” he stated.
“Our discourse is one of companionship, cooperation, and empathy. It is for this reason that the US is alone in the world today,” he commented.
Monday 5 August 2019 18:30
Story Code: 189607 Copy text available
Featured news
Leader Hails Disabled Veterans as “Living Martyrs”
India Shifts Diplomats in Herat, Jalalabad to Kabul as Covid-19 Cases Rise in Afghanistan
13 Taliban militants killed in W. Afghanistan
UN assures support to Afghan government in fight against COVID-19
US, EU, NATO welcome Afghan govt’s team for talks with Taliban
Taliban Must Not Raise Issues With Delegation: Omar
1
PM Modi-Afghan PM Ghani discuss COVID-19 situation
2
Developing: Attack on Dharamshala Ends After Six Hours of Clash
3
ISIS claims attack on Sikh worshippers in Kabul Gurdwara, death toll rises to 25
4
COVID-19: Afghanistan lockdowns frontline provinces
5
India strongly condemns suicide attack on Sikh shrine in Kabul
6
Abdullah says Ghani's response to US aid cut 'irresponsible'
7
Prisoner exchange between Kabul and Taliban will begin on March 31
8
Iran Condemns Deadly Attack on Sikh Temple in Afghanistan
9
Arg announces Intra-Afghan Talks negotiators list
10
Kabul Gurudwara Attack: UN condemns terror attack in Afghanistan