President Donald Trump has ordered a freeze on all Venezuelan government assets in the United States -- the toughest sanctions on Nicolas Maduro's government so far. 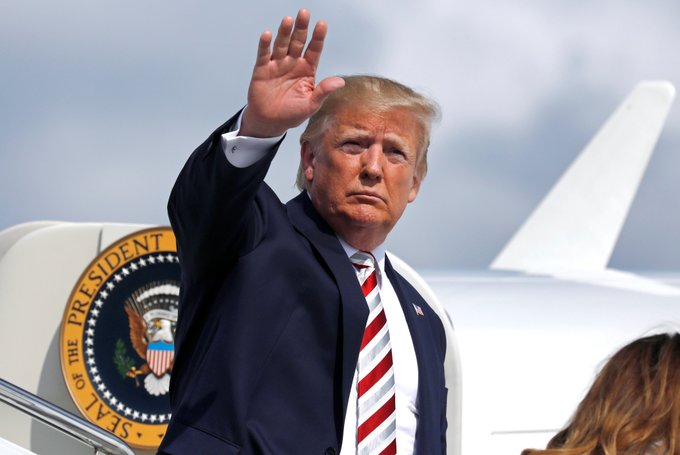 All property and interests in property of the Government of Venezuela that are in the United States ... are blocked and may not be transferred, paid, exported, or otherwise dealt in," Trump’s executive order late Monday said.
There has been no response so far from the Venezuelan government.
The United States has been increasing the economic and diplomatic pressure on President Maduro, who has refused to give up power despite a popular uprising against his authoritarian government.
Trump said last week he is considering a blockade or quarantine of Venezuela. He gave no details of such plans but has always said military action in Venezuela remains on the table.
Russia and Cuba have already sent forces to Venezuela in support of Maduro.
The United States was the first to recognize opposition leader Juan Guaido as the legitimate president of Venezuela after he used his constitutional power as National Assembly leader to declare Maduro's presidency illegitimate. Guaido claimed Maduro's re-election last year was fraudulent. Guaido led a popular uprising against Maduro earlier this year, which appears to have fizzled out.
The collapse in world energy prices, corruption and failed socialist policies have wrecked oil-rich Venezuela’s economy and millions have fled the country and its severe shortages of fuel, quality medical care and many food staples.
Tags:
Trump Freezes Venezuelan Government Assets in US
Source : Afghan Voice Agency(AVA)
Tuesday 6 August 2019 11:00
Story Code: 189645 Copy text available
US sanctions putting denuclearization at risk: North Korea
US President Prolongs Sanctions against North Korea for Another Year
Global trade war would hurt US the most: Report
Iran confirms S. Korea's halt of oil imports
US Designates Iran’s Revolutionary Guards as Terrorist Organization
Featured news
Intra-Afghan Talks to Begin on August 16 in Doha: State TV
Afghanistan-Iran-Uzbekistan Transit Corridor Operational
Taliban expresses readiness to hold peace talks with Afghan govt
29% Increase in Afghanistan’s Exports through Air Corridor
Afghan negotiating team to leave for Doha Wednesday, talks to begin Sunday
Four killed as residents clash with Taliban tax collectors in Ghazni
1
Loya Jirga decides that 400 hard-core Taliban prisoners should be released
2
Zarif criticizes Google for ‘glitch’ in translation of condolences to Lebanese
3
US cargo plane lands in Israel in support of the regime's Iron Dome
4
9 members of a single family wounded in Taliban mortar attack in East of Afghanistan
5
Pakistani soldiers suffer casualties in firing from across Durand Line with Afghanistan
6
U.S. plans to withdraw more than 4,000 troops from Afghanistan by end of November
7
US to cut troop levels in Afghanistan
8
Nabil: Pakistan Is Never Trustworthy
9
Pakistan steadfast for inclusive Afghan settlement: FM
10
Terrorists trained by Pakistani commandos in Afghanistan planning attacks in Kashmir: Report