The Hizb-e-Islami leader Gulbuddin Hekmatyar, who is running for president, at a campaign rally on Wednesday slammed the Afghan government leaders as “foreigners’ slaves” and called the government “un-Islamic”. 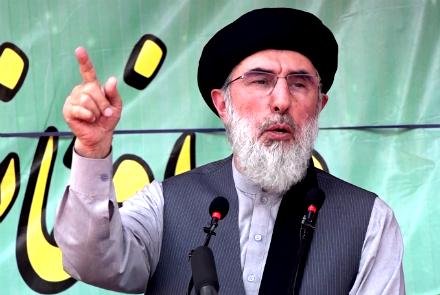 Mr. Hekmatyar said the incumbent government -- which is led by President Ashraf Ghani and Chief Executive Abdullah Abdullah -- has been “occupied” by foreigners.
Mr. Hekmatyar who entered the Afghan politics after a peace deal with the government in 2016, said there will be no security in Afghanistan unless foreign forces withdraw from the country – something the Taliban members are also pushing for in their talks with the US negotiators in Doha.
“They have named this government the Islamic Republic, down and death to those who recognize this government as the Islamic Republic. It is a dark stain on the forehead of Islam,” Hekmatyar told his supporters at a gathering in Kapisa Province, almost 80 kilometers to the north of Kabul.
Mr. Hekmatyar who entered the election race under Peace and Islamic Justice slogan told his supporters from Kapisa, Parwan and Panjshir provinces that average 300 Afghans are killed on a daily basis across the country due to the “failures and weakness” of the government leaders.
“It means that 10,000 Afghans are killed every month,” Mr. Hekmatyar elaborated.
Mr. Hekmatyar pledged that he will address the issue of insecurity, poverty, injustice and oppression once his campaign wins the September presidential election.
From the total number of 17 candidates, so far, only six candidates have officially launched their campaigns.
The Afghan government rejected Hekmatyar’s assertions as “baseless” and in contrast to facts.
“Unfortunately, his [Hekmatyar’s] information about our government is very weak. It is the Islamic Republic of Afghanistan,” presidential spokesman Sediq Sediqqi said.  “He [Hekmatyar] has committed a big mistake by making such a statement.”
Sediqqi said Afghanistan’s government is sovereign and that “no individual or group can question the credibility of the government”.
Tags:
Hekmatyar Labels Current Government ‘Un-Islamic’
Source : Tolo News
Thursday 8 August 2019 09:14
Story Code: 189784 Copy text available
Featured news
Saleh: 4.2B AFN Spent On Security Of Senior Officials, Some Of Whom Weaken The System
African Telecom Giant MTN Exiting Afghanistan And Middle East
COVID-19: MoPH Reports 108 New Cases As Testing Increases Once More
OPEC daily basket price stood at $45.34 a barrel Wednesday
Gunmen in Baghlan Torch 2 Fuel Tankers, Hijack 7
Turkmenistan president sends COVID-19 tests to Afghanistan
1
Afghanistan Calls On Turkey To Take Action Against People Who Unfurled Taliban Flag
2
MoI: Taliban Violated Eid Ceasefire And Killed 20 Civilians
3
Afghan NDS Kills Daesh Intelligence Head in East
4
Kabul Delegation in Kandahar to Probe Spin Boldak Clash
5
Beirut blast: Iran says ready to help Lebanon in any way necessary
6
Afghan parliament speaker calls Loya Jirga on Taliban prisoners 'illegal'
7
Jalalabad Prison Secured, Fighting Continues in Nearby Building
8
SIGAR: Humanitarian Disaster Looms In Afghanistan With One Of The Highest Positive Rates In The World
9
Trump: US Troops 'Probably' Down to 4,000-5,000 by Election Day
10
‘India recruited three Afghan warlords against Pakistan’