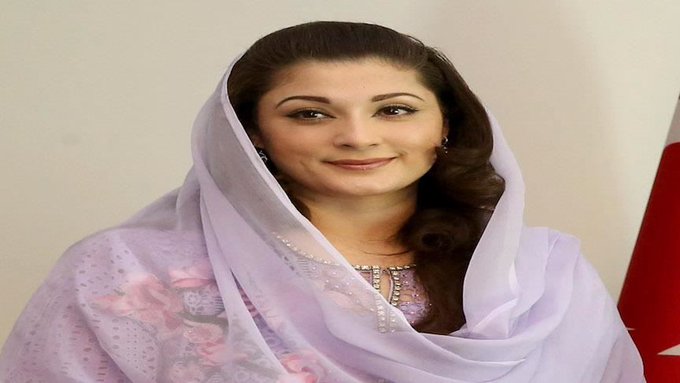 Pakistan's accountability authorities on Thursday arrested a key opposition leader and daughter of three-time Prime Minister Nawaz Sharif in a money laundering case, officials and local media reported.
Maryam Nawaz, who is touted as Sharif's political heir, was taken into custody by the National Accountability Bureau (NAB) -- a corruption watchdog -- minutes after she met with her incarcerated father in a jail in northeastern Lahore city, said a statement from the bureau.
Maryam, who is also the vice president of Sharif's center-right Pakistan Muslim League-Nawaz (PML-N), was supposed to appear before the NAB authorities in a money laundering case but she excused to do so and went to meet Sharif at Kot Lakhpat jail.
However, she was taken into custody as soon as she came out of the jail after meeting her father, who is serving a 7-year term after being found guilty in a corruption case by an anti-accountability court in December last.
Dr. Adnan Ahmed, the personal doctor of Nawaz Sharif told reporters that Maryam was arrested in front of her father during their meeting in the jail.
Her cousin Yousaf Abbas was also arrested in the same case, the NAB statement said.
Political analysts were long been expecting her arrest for being critical of the government of incumbent premier Imran Khan and the "establishment" -- a term to designate the country's powerful army.
She took out massive rallies in Punjab -- the country's largest province and a PML-N's stronghold -- in recent weeks despite a total media blackout.
Several television channels were taken off air last month for airing her news conferences against the government and covering public rallies.
Maryam had been sentenced to seven years in prison in a corruption case related to the Panama Papers scandal last year. She was out on bail in the case.
She will be produced before an anti-corruption court in Lahore on Friday, according to the NAB statement.
In July 2017, Nawaz Sharif was disqualified by the Supreme Court over the Panama Papers scandal, which also led to the filing of three corruption cases. Not long after, the top court also barred him from holding the leadership of his party.
Sharif served as premier in 1990-1992, 1997-1999, and 2013-2017, but was unable to complete even a single five-year term. His two previous governments were dismissed over corruption charges and through a bloodless military coup in 1992 and 1999, respectively.
The three-time premier was sentenced to 17 years -- 10 years and 7 years -- in jail in two corruption cases. His 10-year term was suspended by the Islamabad High Court last year.
Tags:
Pakistan: Former premier Sharif’s daughter arrested
Source : Afghan Voice Agency(AVA)
Thursday 8 August 2019 16:32
Story Code: 189818 Copy text available
Pakistan may move troops from Afghan border to Indian border
Pakistanis among 3 arrested for plotting suicide attack in Kunar province
Pakistan Embassy in Kabul restricts visas for Afghans
Pakistan Embassy in Kabul bans Visa for general applicants due to ‘extortion gang’ activities
Pakistan, Qatar reacts to deadly Kabul bombings which left 56 dead, wounded
Featured news
Afghan civil aviation authority reports $4 mln decline in revenue
A regional economic program is vital for Afghan peace
9 Security Force Members Killed in Uruzgan, Baghlan
Russia starts production of COVID-19 vaccine
Herat Sees 50% Reduction In Patients Seeking COVID-19 Treatment
COVID-19: 45 Positive Cases Reported In Past 24 Hours
1
Intra-Afghan Talks to Begin on August 16 in Doha: State TV
2
Afghanistan, US, Uzbekistan Discuss Trilateral Cooperation
3
Taliban expresses readiness to hold peace talks with Afghan govt
4
Afghan in Guantanamo prison on hunger strike demanding release
5
Afghan negotiating team to leave for Doha Wednesday, talks to begin Sunday
6
Ten Taliban Insurgents Killed in Kunduz
7
Senior Pakistani Military Commanders Call For Early Start of Intra-Afghan Talks
8
Pompeo Says He Warned Russia Against Offering Bounties for US Soldiers
9
Taking Stock of the Taliban’s Perspectives on Peace
10
Gunmen injure member of Afghan negotiating team on outskirts of Kabul