MoFA Protests Nature Of Reception To Taliban In Uzbekistan

Afghanistan’s Ministry of Foreign Affairs (MoFA) in a statement on Saturday protested the nature of “formal reception” given to the Taliban representatives in Uzbekistan, saying it does not facilitate peace talks between the Afghan government and the Taliban. 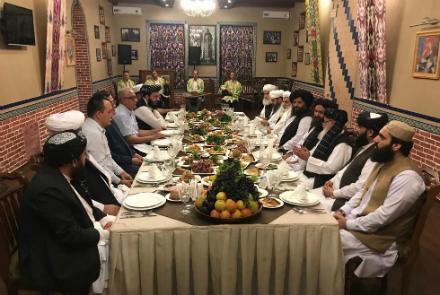 Uzbekistan’s Ministry of Foreign Affairs said in a statement that they “hosted a meeting with the representatives of the political office of the Taliban movement in Doha, headed by its leader Mullah Baradar Akhund”.
During the meeting, the statement said, the two sides discussed the issues related to the promotion of the peaceful political process in Afghanistan in order to establish sustainable and long-term peace in the country.
Mullah Baradar expressed sincere gratitude to the leadership of Uzbekistan for their constant attention to Afghanistan and emphasized that thanks to the efforts of Uzbekistan, the Afghan problem has become again in the center of the world community’s attention, the statement said.
The statement said that Mr. Baradar supported the notion to hold the next round of intra-Afghan dialogue in Samarkand.
The Afghan Ministry of Foreign Affairs said Afghanistan has always welcomed international and regional cooperation, particularly that of the neighboring countries in the Peace Process of Afghanistan.
“We call on all countries, particularly our neighbors, to respect the leadership and ownership of the people and government of the Islamic Republic of Afghanistan in the peace process,” the statement said.
This comes as a senior member of the Taliban, Mullah Khairullah Khairkhwah, said on Friday that the US and the Taliban negotiators will likely sign the much-awaited peace agreement after at the end of this week.
Mr. Khairullah said the talks between the US and the group will continue after Eid al-Adha which ends on August 13.
He said that the peace deal between the US and the Taliban will be signed in the presence of representatives of the UN the Organization of Islamic Cooperation and regional countries after the return of the US Special Envoy Zalmay Khalilzad to Doha after Eid
Source : Afghan Voice Agency(AVA)
Saturday 10 August 2019 14:25
Story Code: 189871 Copy text available
Featured news
ADB Approves $110 Million Grant To Enhance Afghan Power Supply
Pregnant Woman Shot Dead in Faryab
Hezb-e-Islami Supporters Demonstrate In Kabul Against Najibullah’s Memorial Service
Traffic Accident In Herat Leaves 11 Died
U.S. Embassy Paid $8 Million For Meals It Did Not Need And Were Not Provided
Child Rescued From Kidnappers In Herat
1
Hasty International Withdrawal From Afghanistan Would Be Unwise: Pakistan PM Khan
2
EU Envoys Stress On Urgent Need For Comprehensive Ceasefire In Afghanistan
3
Abdullah Abdullah arrives in Islamabad