Imam Khamenei: Trump’s Deal of the Century “Doomed to Failure”

Leader of the Islamic Revolution Ayatollah Sayyed Ali Khamenei has called US President Donald Trump’s “Deal of the Century” for the Palestinian territories a non-starter, which is doomed to failure. 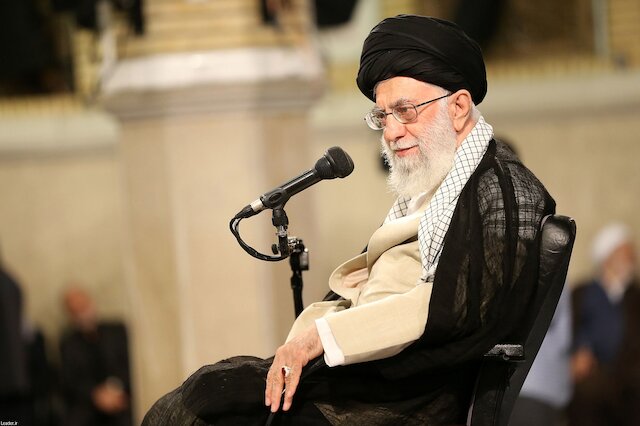 “The ploy of Deal of the Century prepared by the oppressive US and its treasonous cohorts is a crime against human society, and not just the Palestinian nation,” the Leader said in a message to the great Hajj congregation on Saturday, adding that with the Palestinian people’s stunning resistance, the deal is doomed to failure.
Here is the full text of the Leader’s message:
In the name of Allah, the Most Beneficent, the Most Merciful
All praise is due to Allah, the Lord of the Worlds, and peace be upon his exalted, trustworthy messenger, Muhammad the last of the prophets, and his pure progeny, especially the one remaining with Allah on earth, and on his chosen companions and those who faithfully followed them, until the day of judgment.
Every year, the time of Hajj is the resort for the Islamic Ummah where they receive the Lord’s mercy. Quran’s call of “And proclaim Hajj among men” [Quran 22:27] is a call to everyone throughout history to come to this distribution of mercy, so that their God-seeking hearts and souls, and their thoughts and views benefit from its advantages; and every year, the lessons and teachings of Hajj propagate throughout the Muslim world by congregations of people.
The Hajj presents a miniature scale of a set of fundamental pillars of the Islamic society by placing the elixir of Dhikr and servitude—which is the main element for the cultivation, progress, and growth of individuals and the society— next to congregation and unity, which are the symbols of the unified Ummah; the movement around a unique center, and on the path towards a common goal—which are the keys to the endeavor and livelihood of the Ummah based on monotheism—;and through harmony among every Hajj pilgrim, where there is no distinction—which is the sign of removing discrimination and providing everyone with the same opportunity. Every one of the rituals of Hajj including Ihram, Tawaf, Sa’i, wuquf, ramy, movement, and repose, is a symbolic reminder of a part of the picture presented by Islam of its ideal society.
Exchange of knowledge and assets between people of different countries and places far apart, and spreading awareness and experience, asking for the news of one another, removing barriers of misunderstanding, bringing the hearts closer, and storing strength to confront common enemies are the vital and magnificent outcomes of Hajj, which otherwise would not be achieved through hundreds of the usual and typical gatherings.
The ritual of Bara’ah which means refusing every instance of mercilessness, cruelty, wrongdoing and corruption of the tyrants of any time, and rising against intimidation and unjust levy by the arrogant throughout history, is one of the great advantages of Hajj, and an opportunity for oppressed Muslim nations. Today, repudiating the front of shirk [polytheism] and kufr [disbelief] made up of the arrogant powers—the foremost of them being the U.S.—equals refusing the killing of the oppressed, and waging wars. It equals condemning the sources of terrorism, including ISIL and the American Black Water. It is the Islamic Ummah’s shout at the child killers of the Zionist regime, and their backers and cohorts. It is a condemnation of the United States and their associates’ warmongering, in the sensitive regions of West Asia and North Africa, who have pushed the nations’ pain and suffering beyond limits and who bring them new catastrophes every day. It means refusing racism, and discrimination based on geography, race, and color of skin. It means refusing the arrogant and vicious behavior of aggressive and seditious powers against dignified, noble and just behavior recommended to everyone by Islam.
These are some of the benedictions of the Abrahamic Hajj that pure Islam calls us to. And this is the incarnation of an important part of the ideals of the Islamic society that every year, through every one of the participating Muslims, and directed by Hajj, puts on a grand and rich spectacle, calling everyone through a clear language, to try to create such a society.
The elite of the Muslim world, some of whom are now present at Hajj from different countries, have a crucial and important duty. These lessons must be transferred to all nations and the public through their efforts and ingenuity, and moral exchange of ideas, motivations, experience, and knowledge must be realized by them.
Today, one of the most important issues of the Muslim world is Palestine, which is at the top of Muslims’ political issues, regardless of their school of thought, race, and language. The greatest injustice in recent history has happened in Palestine. In this painful affair, all that a nation had—their land, homes, farms, belongings, dignity, and identity—was confiscated. With God’s assistance, this nation has not surrendered to defeat and has not given up, and today, they are on the battlefields more enthusiastic, and braver than yesterday. But the ultimate outcome requires assistance from all Muslims. The ploy of Deal of the Century prepared by the oppressive US, and its treasonous cohorts, is a crime against human society, and not just the Palestinian nation. We are inviting everyone to active participation in overcoming this deception by the enemy, and with the power and help of God, we consider this and every other ruse by the arrogant front doomed to failure against the efforts, and faith of the Resistance front.
Almighty Allah said: “Or do they intend a plot? But those who defy Allah are themselves involved in a Plot!” [Quran 52:42]. True is what Almighty Allah said. I supplicate Almighty God for success, blessing, comfort, and acceptance of prayers for every one of you respected pilgrims.