Afghanistan’s U-19 National Football Team has grabbed a point against Uzbekistan in the early match of the 2019 CAFA U-19 Championship in Dushanbe, Tajikistan after they were down 2-0 in half-time and launched an impressive recovery and claim a second successive 2-2 draw. 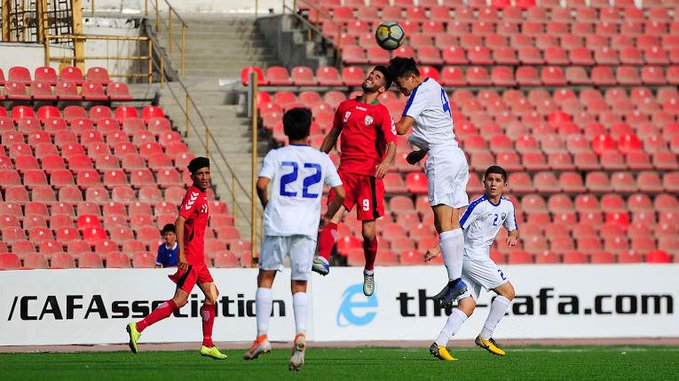 The result leaves regional powerhouse Uzbekistan with just one point to show for their first two matches, after an 86th-minute equaliser from Tareq Mohammadi ensured the points would be shared, AFC reported.
Uzbekistan showed few signs of trouble early, taking the lead when Bekzhod Shamsiev applied the finishing touch to a beautifully worked, and evidently well-rehearsed, short corner routine in the 10th minute.
Their position became even stronger when Takhir Rafaelov slammed in a second off the woodwork in the final moments of the first-half, but Afghanistan hit back just before the hour mark as Farshid Wojdi showed great composure to slip home his second goal in as many days.
Further chances followed for Afghanistan, but the decisive moment came with four minutes of normal time remaining, when the marauding Wojdi supplied a cross-field pass for Mohammadi who unleashed a precision first-time effort from 15 yards to give Ahmad Zia Azimi’s side a share of the spoils.
Afghanistan will face table-toppers Tajikistan when the competition resumes on Monday, while Uzbekistan have until Tuesday to recover for their next match, also against the tournament hosts.
Source : Afghan Voice Agency(AVA)
Sunday 11 August 2019 10:24
Story Code: 189922 Copy text available
Featured news
Saleh: 4.2B AFN Spent On Security Of Senior Officials, Some Of Whom Weaken The System
African Telecom Giant MTN Exiting Afghanistan And Middle East
COVID-19: MoPH Reports 108 New Cases As Testing Increases Once More
OPEC daily basket price stood at $45.34 a barrel Wednesday
Gunmen in Baghlan Torch 2 Fuel Tankers, Hijack 7
Turkmenistan president sends COVID-19 tests to Afghanistan
1
Football: Arsenal Wins FA Cup After Beating Chelsea
2
Pakistan and England cricket teams pay tribute to COVID-19 victims