Presidential candidate Abdul Latif Pedram on Thursday appeared at his first election camping rally in Kabul where he stressed the need for establishing a federal government in the country which he believes will ensure an equal right to all citizens of Afghanistan. 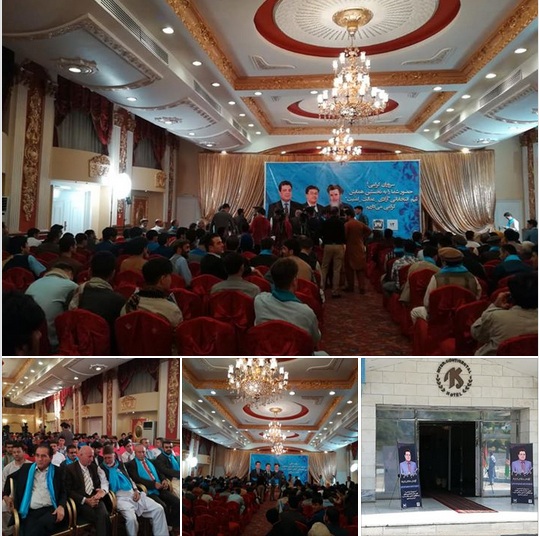 Mr. Pedram said the National Unity Government's tenure has ended, calling it a regime.
"Our stance is clear. We don’t recognize the National Unity Government," he said.
Mr. Pedram said the presidential election should be held free and fair and that others should not decide on the future of Afghans.
He said they want "the federal republic of Khorasan" for Afghanistan, which differentiates him from other candidates.
Mr. Pedram said that Afghanistan should be divided into several administrative units so that people's rights are ensured equally.
“Our difference with other candidates is that we want to change the system. Clearly, our team and all of us are federalists and republicans. We want a federal government,” Mr. Pedram stated.
"We are not against talks with the Taliban, but it is only acceptable for us if it is run by a federal government," he added.
Mr. Pedram said he will not allow discrimination against women and that he has proper plans for women empowerment.
He suggested that health service and education should be free of charges for the people.
He also talked about the Durand Line and said he recognizes the line as an official border between Afghanistan and Pakistan.
“Regional countries have priority for us in our foreign policy and we want good relations with neighboring countries and we don’t have any problem with the Durand line with Pakistan and that is an officials’ frontier,” Mr. Pedram said.
Afghan presidential elections are scheduled for September 28 in which 18 candidates are running to secure a mandate from Afghans for a five-year term.
Tags:
Pedram
Source : Afghan Voice Agency(AVA)
Thursday 15 August 2019 14:17
Story Code: 190052 Copy text available
Afghan Politicians To Meet in Pakistan for Peace Talks
Featured news
Afghan Exporters Showcase Afghanistan’s Finest Products at GulFood Expo Dubai
President Assad: Syria Has Emerged Victorious over Terror
Taliban militants kill five Afghan soldiers in Kunduz
Karzai calls for Iran's participation in safeguarding Afghanistan
'Pak-Afghan synergy can make region zone of prosperity'
'We can't miss this opportunity': UN backs Afghan peace process
1
40 days ago, US killed a man who first rushed to Iraq’s aid against Daesh
2
General Suleimani’s Will Urges All Muslims to Preserve Unity in Face of US Intervention
3
Iran to Israel: Don’t you dare take any foolish action against our interests in Syria
4
Syrian parliament recognizes Armenian genocide amid Ankara-Damascus tensions
5
Afghan sports coach says she will flee after dog shot dead
6
Afghanistan Launches National Trade Policy
7
Has Afghanistan’s security taken precedence over Iraq for the US?
8
US service member killed in non-combat incident in Afghanistan
9
US Officials to Ghani: Peace Agreement Is Conditions-Based
10
Afghan war: US, Taliban close to 'reduction in violence' deal