Trump Wants India, Other Countries To Fight In Afghanistan

Countries like India, Iran, Russia and Turkey will have to fight terrorists in Afghanistan “at a certain point of time”, US President Donald Trump said at the White House on Wednesday, mentioning that the job against terrorism is done only by the United States. 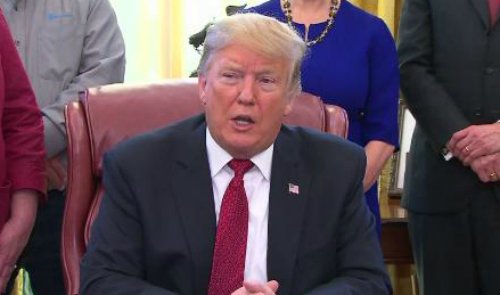 Mr. Trump said that other nations currently are making very less efforts against the terrorists in Afghanistan.
“At a certain point Russia, Afghanistan, Iran, Iraq, Turkey they are going to have to fight their battles too. We wiped out the caliphate 100 percent. I did it in record time.” Mr. Trump told reporters at the White House while responding to a question on the reemergence of Daesh in Afghanistan.
“But at a certain point of time, all of these countries are going to have to fight them because do we want to stay there for another 19 years? I don’t think so,” he added.
Mr. Trump’s comments came a day after he indicated that the US forces would not completely withdraw from Afghanistan and America would have “somebody there” to make sure that the Taliban does not regain control.
He said that the US was fighting the terrorists in Afghanistan despite being 7,000 miles away, while India and Pakistan were not doing so even after being next door.
“Look, India is right there. They are not fighting it. We are fighting it. Pakistan is right next door. They are fighting it very little. Very, very little. It’s not fair. The United States is 7,000 miles away,” Mr. Trump said.
He said the US under him had eliminated Daesh.
“We haven’t been hearing much about IS. We took the caliphate 100 percent. When I took it at 98 percent I said all right, maybe we go home now, let these other countries in. Everyone went crazy. They said do 100 percent. They said it was going to take a year. It took me a month and they are gone,” he said.
Tags:
Trump Wants India, Other Countries To Fight In Afghanistan
Source : Tolo News
Thursday 22 August 2019 08:54
Story Code: 190360 Copy text available
Featured news
Intra-Afghan peace talks delayed
Political leaders condemn attempted assassination of Fawzia Koofi
Afghan civil aviation authority reports $4 mln decline in revenue
A regional economic program is vital for Afghan peace
9 Security Force Members Killed in Uruzgan, Baghlan
Russia starts production of COVID-19 vaccine
1
Intra-Afghan Talks to Begin on August 16 in Doha: State TV
2
Afghanistan, US, Uzbekistan Discuss Trilateral Cooperation
3
Taliban expresses readiness to hold peace talks with Afghan govt
4
Afghan in Guantanamo prison on hunger strike demanding release
5
Afghan negotiating team to leave for Doha Wednesday, talks to begin Sunday
6
Ten Taliban Insurgents Killed in Kunduz
7
Senior Pakistani Military Commanders Call For Early Start of Intra-Afghan Talks
8
Pompeo Says He Warned Russia Against Offering Bounties for US Soldiers
9
Taking Stock of the Taliban’s Perspectives on Peace
10
ANDSF Conducting Military Exercise Near Durand Line Has A Message: MoD