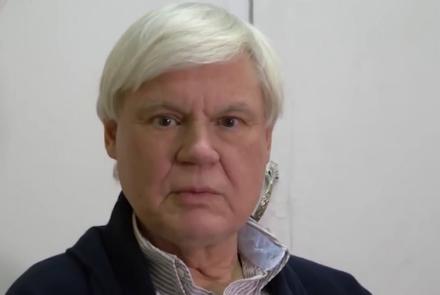 for the MoCI said that the German advisor was recommended to the president by the deputy minister of commerce and industries, but subsequently the former minister of commerce and industries said that Ghani himself picked the advisor.
In an interview with German media, the German advisor who is named Wolfgang Plasa Uber said that his wife is from Afghanistan and that he was hired to the post following a meeting his wife had with the Afghan president.
According to a former deputy minister, a notification was issued from the administrative office of the president, and in it Ghani directed the minister of finance to assist with the appointment of the German advisor.
This source said that Ghani approved a $41,150 per month salary for Uber, starting February 20, 2018, from the discretionary budget of the Ministry of Commerce and Industries, for research and business development services.
Ghani asked the Ministry of Finance (MoF) to add the German’s salary to the budget.
“On the recommendation of Kamila Sediqqi, the acting minister of commerce and industries--and later on during Mr. Humayoun Rasa’s tenure-- Dr. Plasa Uber was recommended as an advisor in the Ministry of Commerce and Industries,” said Sameer Rasa, spokesman for the Ministry of Commerce and Industries.
“My wife is an Afghan, she talked about me during a meeting that she had with the president and the president asked me to work with him,” said Plasa Uber.
Some Afghan citizens also lashed out at Ghani over the appointment.
“Every day we are begging to others for help, but Mr. Ghani hires an advisor and gives him a $41,000 [per month] salary,” said a resident in Kabul Afzal.
“When capitals flows from our country, it poses serious harm to our government,” said Mustafa, a resident of Kabul.
Mr. Plasa Uber served in the Ministry of Commerce and Industries as a consultant on the export and import affairs.
Tags:
Ghani Approved $41,000/Month Salary For German Advisor: MoCI
Source : Afghan Voice Agency(AVA)
Monday 23 September 2019 09:36
Story Code: 191989 Copy text available
MTN finalizes the agreement with MoCIT over 3G services
ISIS has amassed 5,000 fighters close to CIS border in North of Afghanistan: Russia
Pakistan to add 60,000 more troops along the Durand Line with Afghanistan
Afghan War; Over 93,000 Civilian Victims In Last Decade
In Nangarhar Province 4000 Shelter will Build for Returnees
Featured news
MoPH Survey Finds 10 Million People Infected With COVID-19 In Afghanistan
Afghan Imports To Pakistan See 28.53% Decrease In FY 2019-20
Afghan forces arrest top ISIS leader in Kunar province
Power Exports From Iran Resumed After Repairs
Salaries Of 197 High-Ranking Officials, Employees Suspended Due To Non-Registration Of Assets
Indian doctor detonated car bomb in deadly attack targeting jail in East of Afghanistan
1
MoI: Taliban Violated Eid Ceasefire And Killed 20 Civilians
2
Afghanistan Calls On Turkey To Take Action Against People Who Unfurled Taliban Flag
3
SIGAR: Taliban ‘Harassing’ ANDSF, Al Qaeda Still Present
4
Afghan NDS Kills Daesh Intelligence Head in East
5
Kabul Delegation in Kandahar to Probe Spin Boldak Clash
6
Afghanistan saw 'deadliest' week in 19 years last month: SIGAR report
7
SIGAR: Humanitarian Disaster Looms In Afghanistan With One Of The Highest Positive Rates In The World
8
Jalalabad Prison Secured, Fighting Continues in Nearby Building
9
SIGAR: Up to 70% ‘Ghost Soldiers’ Within ANDSF Ranks
10
Developing: 13 Civilians Killed, 42 Wounded As Clashes Continue In Jalalabad Prison After 14 Hours