The head of Transparent Election Foundation of Afghanistan (TEFA), a Kabul-based election monitoring organization, claimed on Wednesday that he is threatened to death by the ruling electoral team. 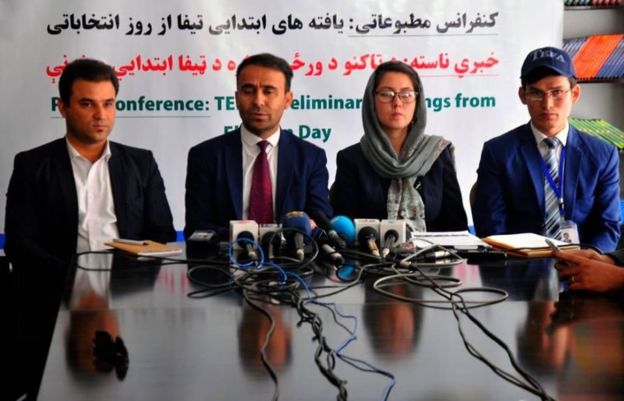 “We are being threatened and those who have threatened me can hear my voice. I’m concerned because I have no protection and there is no mechanism in place for our protection,” said Naeem Ayoubzada, the CEO of TEFA while speaking at a press conference in Kabul.
Apparently, pointing the accusation on President Ashraf Ghani’s “State-Builder” team, Mr. Ayoubzada said that he was threatened to death because of providing information about Afghan presidential election that took place on September 28 across the country.
However, Najib Danish, a spokesman for the State-Builder’s team rejected the allegation of Mr. Ayoubzada.
“If he has any document to prove his claims, he should submit it to judicial organs,” Mr. Danish told media.
In addition, the electoral watchdog criticized the Independent Election Commission (IEC) for enforcing limitations on electoral observers.
“Though IEC has built a golden cage but observers have no access to information,” said Nasir Nasiri, a member of TEFA who observes the activities of IEC’s tally center on daily basis.
Meanwhile, a senior member of the IEC said on Wednesday that the commission is independent on its affairs and they have allowed all observers to monitor the processes.
“The election commission is not under any pressure,” said Awrang Zaib, a member of the IEC.
TEFA also claimed that there are possibilities of electoral fraud in the election commission.