Trump: Going to Middle East worst decision in US history

US President Donald Trump says the United States’ military engagement in the Middle East is the "worst decision ever made” in US history. 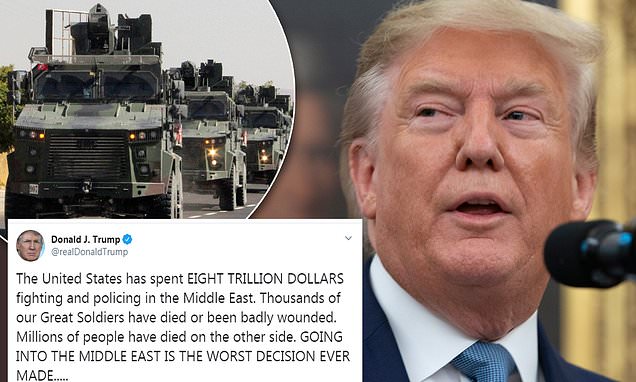 Trump made the comments in several tweets Wednesday, referencing the US invasion of Iraq in 2003 on the false pretext of seizing Iraqi dictator Saddam Hussein’s WMDs.
“The United States has spent EIGHT TRILLION DOLLARS fighting and policing in the Middle East. Thousands of our Great Soldiers have died or been badly wounded. Millions of people have died on the other side,” Trump said. “GOING INTO THE MIDDLE EAST IS THE WORST DECISION EVER MADE IN THE HISTORY OF OUR COUNTRY! We went to war under a false & now disproven premise, WEAPONS OF MASS DESTRUCTION. There were NONE! Now we are slowly & carefully bringing our great soldiers & military home. Our focus is on the BIG PICTURE! THE USA IS GREATER THAN EVER BEFORE!”
He further suggested that the US withdrawal from northern Syria for Turkey to start its invasion against Kurds amounts to the pullout of only 50 soldiers.
“Fighting between various groups that has been going on for hundreds of years. USA should never have been in Middle East. Moved our 50 soldiers out,” the US president said.
The American commander in chief, who is under pressure for giving up support for the previously backed Syrian Kurds, also pointed the finger at Europe for not accepting former Daesh militants from their country as a way to justify the US move.
“Turkey MUST take over captured ISIS fighters that Europe refused to have returned. The stupid endless wars, for us, are ending,” Trump alleged.
Trump has previously said that it is “too costly” to keep supporting the Kurdish militants in the region, which Ankara views as terrorists linked to local autonomy-seeking militants of the Kurdistan Workers’ Party (PKK).
Turkey has, since 2016, launched two military operations inside Syria against the Kurds and seems to be set for a third one.