New pictures have been released of an Iranian oil tanker which was recently damaged in a suspicious attack in waters off the Saudi coast in the Red Sea. 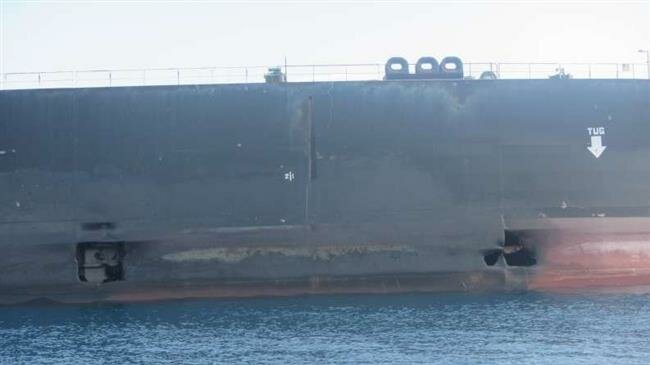 One of the photos, which were released on Monday, shows two gaping holes in the hull of the tanker Sabiti, owned by the National Iranian Tanker Company (NITC).
Other photos show the crew aboard the vessel as well as close-up views of the holes.
The oil tanker was hit by two separate explosions about 60 miles (96 km) from the Saudi port city of Jeddah on Friday. The blasts caused an oil spill that was stopped shortly afterwards.
The Port and Maritime Organization of Iran (PMO) said Saudi authorities had refused to provide help to Sabiti after it came under attacks by two missiles fired from an unknown location.
Government spokesman Ali Rabiei said Iran was investigating the case but "avoiding hastiness."
"An appropriate response will be given to the designers of this cowardly attack, but we will wait until all aspects are clarified," he added.
Secretary of Iran's Supreme National Security Council (SNSC) Ali Shamkhani said the country will not leave "piracy and banditry" in international waters unanswered.
The Iranian tanker is currently heading back to the Persian Gulf with Larak Island as its destination, unconfirmed reports say.
The incident is the latest involving oil tankers in the Red Sea and Persian Gulf region, a vital waterway linking oil-producing countries to world markets.