US President Donald Trump has said that "big sanctions" on Turkey are coming after its military launched an offensive against Kurdish fighters in northern Syria. 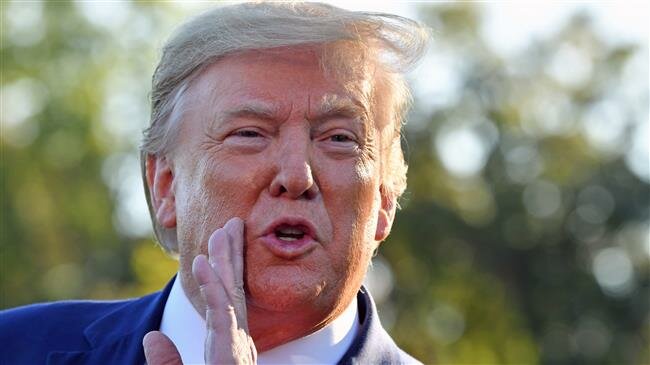 In a tweet on Monday, Trump also said that the Syrian Kurds targeted by Turkish forces may be releasing some Daesh prisoners to get the United States involved in the conflict.
"Big sanctions on Turkey coming! Do people really think we should go to war with NATO Member Turkey? Never ending wars will end!" he tweeted.
"We are not going into another war between people who have been fighting with each other for 200 years. Europe had a chance to get their ISIS (Daesh) prisoners, but didn’t want the cost. 'Let the USA pay,' they said,” he added. "Kurds may be releasing some to get us involved. Easily recaptured by Turkey or European Nations from where many came, but they should move quickly."
Turkey on Wednesday began pounding positions of the Syrian Democratic Forces (SDF) with jets and artillery and sent in troops to purge them from the area east of Euphrates.
The offensive came three days after Trump in a sudden change of policy told his counterpart Recep Tayyip Erdogan that he would pull US troops from the region, effectively exposing the Kurdish militants to their archenemy, Turkey.
Shortly after the attack began, a bipartisan group of senators brought legislation that would freeze all assets Erdogan and other Turkish leaders have in the US and impose visa restrictions until Ankara withdraws from Syria.
It would also slap sanctions on entities that do business with Turkey's military or support its domestic energy industry for use by its armed forces.
Trump's move to withdraw troops from Syria was widely condemned by both Republican and Democratic Party lawmakers in Congress. House lawmakers are drafting a resolution to impose punitive sanctions on Turkey for its offensive in Syria.
Speaking before a crowd of evangelicals on Saturday, Trump did acknowledge that his choice was unpopular, but asserted that it was time to stop the participation of American troops in an “endless war.”
The US has "paid a lot of money to the Kurds over the years", he said, adding, but “don’t forget, they are fighting for their land, they haven’t helped us fight for our land.”
On Friday, the Pentagon said Washington was "greatly disappointed" by the Turkish incursion, noting the US had not abandoned its Syrian Kurdish allies to a Turkish military onslaught.