Thousands of Rohingya Muslims from Myanmar who have taken refuge in Bangladesh are now planned to be relocated from camps to a flood-prone island in the Bay of Bengal. 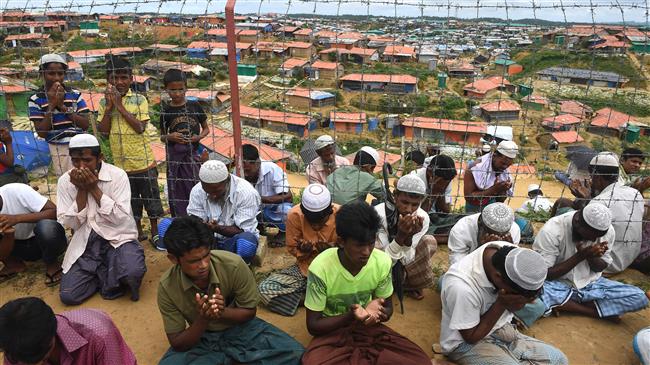 Bangladesh’s refugee commissioner, Mahbub Alam, said on Sunday that the Dhaka government would start relocating the Rohingya Muslims to Bhashan Char Island within the next few weeks in a declared bid to ease overcrowding in the refugee camps at the border district of Cox’s Bazar.
“Our officials are compiling the lists of the refugees who are willing to move there,” he said. “Approximately 6,000-7,000 refugees have already expressed their willingness to be relocated to Bhashan Char.”
Alam said Rohingya leaders would be taken to Bhashan Char to view the facilities and living conditions there.
Safety facilities built on the island include a three-meter high embankment along its perimeter to keep out tidal surges during cyclones, and a warehouse to store months’ worth of food rations, he added.
A senior navy officer involved in building the facilities on the island said it could launch by December, with some 500 refugees to be sent daily.
Some Rohingyas reportedly agreed to relocate to the island after they were shown video footage of the shelters.
Bangladesh has been planning since last year to relocate Rohingya to the desolate flood-prone site.
Some human rights groups have voiced concern about the plan because the island is remote and prone to devastation from cyclones. They have warned the island might not be able to withstand violent storms during the annual monsoon season.
In the past five decades, powerful cyclones have killed thousands of people in the Meghna River estuary, where the island is located.
Bangladeshi officials have also said they expect that a United Nations (UN) delegation would visit the island in the next few weeks.
Shah Kamal, the secretary of Bangladesh’s Disaster Management Ministry, said the government was in talks with UN agencies to move the refugees to the island. “There is no reason to be concerned about floods because we have built storm surge embankment, with all other facilities.”
UN concerned whether island is habitable
However, Yanghee Lee, the UN special rapporteur on human rights in Myanmar, who visited in January, said she feared a new crisis if the Rohingya were taken to the island.
“There are a number of things that remain unknown to me even following my visit, chief among them being whether the island is truly habitable,” she said.
Densely-populated Bangladesh has been grappling with large refugee numbers. Bangladesh and Myanmar signed a repatriation deal two years ago, but virtually no refugees have returned to date.
The number of refugees in Cox’s Bazar has swelled since August 2017, when a military-led crackdown in Myanmar — which UN investigators have said was conducted with “genocidal intent” — prompted some 740,000 Rohingya to flee to Bangladesh, which was already hosting some 200,000 Rohingya when the 2017 exodus began.