Cristiano Ronaldo rescued Juventus when his penalty delivered a barely-deserved 2-1 win over Genoa at the Allianz Stadium. 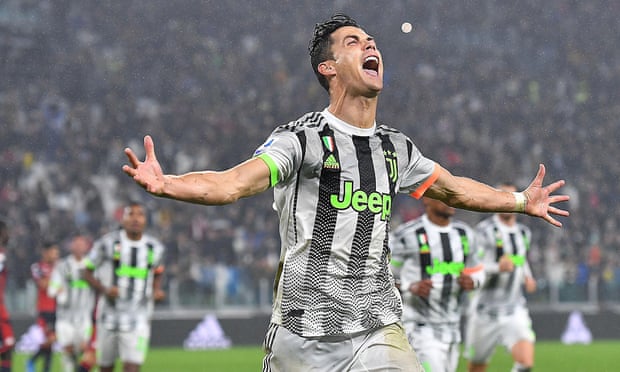 Juventus needed to respond to Internazionale’s victory at Brescia 24 hours earlier to return to top spot and Leonardo Bonucci’s 36th-minute header sent them down the right path.
Christian Kouame’s miskick fooled Juve goalkeeper Gianluigi Buffon as Genoa levelled four minutes later, yet the dismissal of Francesco Cassata after half-time gave the hosts the upper hand once more. They could not make their personnel advantage count and lost it when substitute Adrien Rabiot saw red in the 86th minute.
Ronaldo was offside when he put the ball in the net deep into stoppage time – yet he was subsequently caught by Antonio Sanabria in the box and made no mistake with his penalty, sparing Juve’s blushes.
Atalanta kept top-three rivals Napoli at arm’s length by forcing a 2-2 draw at the Stadio San Paolo. Nikola Maksimovic’s 16th-minute headed goal from a José Callejón cross briefly brought Napoli into a share of third place with their in-form guests, but Remo Freuler levelled shortly before half-time


Arkadiusz Milik, who had hit a post midway through the first half, restored Napoli’s lead by rolling home a Fabian Ruiz through ball in the 72nd minute. Josip Ilicic beat the offside trap to equalise four minutes from time, however, and the Slovenian was then denied a winner in stoppage time.
Both Rome clubs trounced their respective opponents 4-0, with Roma climbing to fourth and Lazio to fifth.
In Spain, Real Madrid swept past bottom club Leganés 5-0 at the Santiago Bernabéu to keep the pressure on La Liga leaders Barcelona. Real, beaten 1-0 at Real Mallorca in their last league outing – took just seven minutes to open the scoring through the Brazilian forward Rodrygo. The German midfielder Toni Kroos soon flicked home a second at the near post.


In the 24th minute, Sergio Ramos scored a penalty at the second attempt after his initial kick had been saved by Juan Soriano, who was ruled by VAR to have been off his line. Karim Benzema finally got a deserved goal when converting a penalty with 20 minutes left.
Substitute Luka Jovic scored his first league goal since a big-money summer move from Eintracht Frankfurt when he headed in at the back post during stoppage time. Real closed up to within a point of leaders Barcelona, both clubs now having played 10 matches.


Valencia fought back to draw 1-1 against Sevilla at the Mestalla. Lucas Ocampos had give the visitors the lead in first-half stoppage time. Los Che thought they had equalised on 75 minutes, only for Manu Vallejo to see his effort ruled out by an offside flag. Fellow substitute Ruben Sobrino, though, made sure of a point with 10 minutes left when he headed home from a free-kick.
Enis Bardhi and Borja Mayoral were on target in the first half as Levante beat Real Sociedad 2-1 at the Reale Arena.
Iker Muniain scored twice early on as Athletic Bilbao beat Espanyol 3-0 at San Mames.
Nabil Fekir struck a late winner for Real Betis to secure a 2-1 win over strugglers Celta Vigo.