Russia: US smuggling Syrian oil worth $30 million a month

Russia has slammed President Donald Trump's plan to deploy troops into Syrian oil fields as “criminal activity,” accusing the US of seeking to smuggle out oil worth over “$30 million" per month. 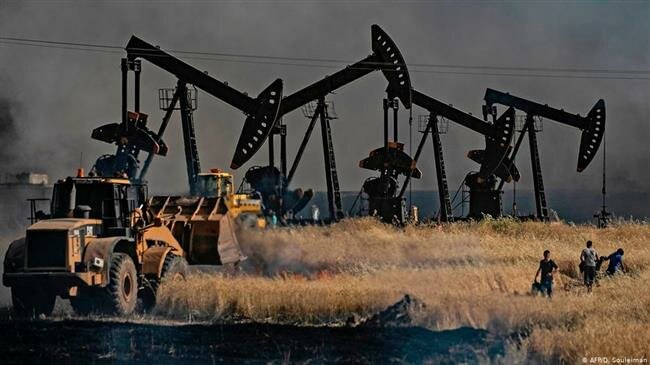 Russian Foreign Ministry spokeswoman Maria Zakharova said the US was "pumping oil out of northeastern Syria" while masking “its criminal activity by some pretexts of a struggle against the Daesh terrorist group."
The remarks come after Washington reversed an earlier decision to pull out all troops from northeastern Syria, announcing last week the deployment of about 500 troops to the oil fields controlled by US-backed Kurdish forces.
Speaking earlier this week, Pentagon chief Mark Esper said the deployment will seek to secure oil resources from Daesh. Washington, he said, will use “overwhelming” force against any other actor challenging the US, including Syria’s own government.
Speaking last week, however, US President Donald Trump suggested that Washington sought economic interests by controlling the oil fields.
"We want to keep the oil, and we'll work something out with the Kurds so that they have some money, have some cashflow. Maybe we'll have one of our big oil companies to go in and do it properly," said Trump.
The developments come as Damascus is in great need of its major oil deposits in order to gain revenue and address its energy needs amid crippling unilateral Western sanctions targeting the war-ravaged country.
Due to the sanctions and war, Syria is currently extracting only 10 percent of its pre-war oil production capacity.
Zakharova said the US was effectively "bypassing its own sanctions" against Syria by seizing the country's oil.
She added that Washington was hypocritically declaring “commitment to some democratic values and international law" while flagrantly violating the country’s sovereignty.
The spokeswoman stressed that it was within the rights of the international community to question America’s activities, warning that US troops were “not going to leave the areas in the near future”.
Syria, along with Iran and Turkey, have already denounced Washington’s illegal appropriation of Syrian oil.
Speaking on Tuesday, Iranian Foreign Minister Mohammad Javad Zarif sarcastically praised Trump for admitting that he intends to “secure" the Syrian oil.
“At least President Trump is honest to say what the United States intends to do,” Zarif quipped.