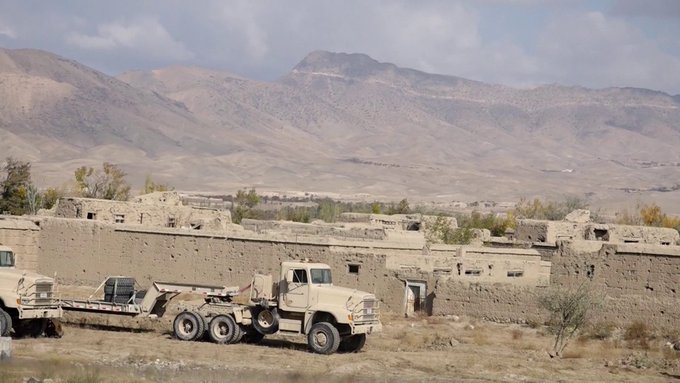 According to local residents, security forces have destroyed houses in Milli Khail village along Kabul-Kandahar highway by using excavators and aerial bombs.
“They are finding a safe place for themselves to rest in calm. They don’t care about my house. Why they are destroying my house?” said Mohammad Agha, a resident of the area.
During the last couple of years, almost every day, government forces have engaged in fierce fighting with the Taliban militants in the area.
“They are destroying houses because Taliban attack government convoys in the area and inflict losses to the government. But innocent people do not have control over Taliban or government forces,” said Karimullah, another resident of Sayed Abad district.
In the past, authorities blamed Taliban fighters for using civilian houses as shelters and strongholds.
Akbar Khan, an old man in the village said he doesn’t remember a peaceful day during the last 18 years.
Pointing to a totally destroyed house, Khan said the house was hit by an airstrike a couple of days ago. He added that as a result four members of a single family including a child were injured.
“I was sleep in my room when a drone strike hit this door. My house is over there. After bombardment they took me out and told me: We will kill you. You are Talib,” said Nasrullah, another villager.
Local officials including provincial governor and police chief denied making comment in this regard.
Wardak is a volatile province located in the central part of Afghanistan. The Taliban insurgent group has a huge presence in the province and usually carry out deadly attacks against Afghan forces.
Tags:
Afghan Forces Destroy 80 Residential Houses in Wardak: Villagers
Source : ariananews
Sunday 3 November 2019 19:34
Story Code: 194635 Copy text available
Afghan villagers face hunger as fighting cuts northern roads
Featured news
Afghanistan Schedules Meetings To Prepare For Intra-Afghan Talks
Pakistan Opens Two More Border Crossings For Trade With Afghanistan
It will be clear next week when talks with Taliban will begin: Ghani
Pakistan Army Rubbishes India Claims of Troop Deployment in Gilgit-Baltistan
It will be clear next week when talks with Taliban will begin: Ghani
COVID-19: Long-Shut Oxygen Factory Gives Free Refills In Kabul
1
Floods Threaten 1.3 Million Afghans
2
Deadly child malnutrition rises in Afghanistan at alarming rate: UN
3
Azerbaijan sends aid to Afghanistan to fight against coronavirus
4
US space agency NASA to pay the public for designing a space toilet for the Moon
5
COVID-19: 271 New Cases Reported In Afghanistan; Tally At 31,238
6
Global COVID-19 Death Toll Exceeds Half A Million As Cases Surge
7
'Worst is yet to come': WHO chief advocates for solidarity to fight the coronavirus
8
COVID-19: Afghanistan Sees Increase in Fresh Cases as Tally Surges Close to 31,000
9
MEC Reports Corruption In Customs And Revenue Departments
10
COVID-19: Afghanistan Not Testing Samples At Full Capacity