Two people have been killed in an armed clash over picking saffron harvest in west of Afghanistan. 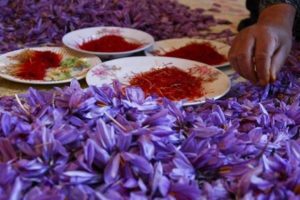