Afghan presidential candidate Abdullah Abdullah on Sunday said that national interests suggest removal of fraudulent votes and that there would be no compromise this time. 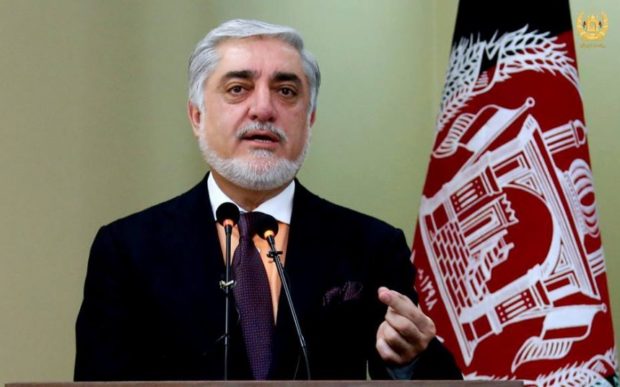 Addressing his supporters in Loya Jirga tent in Kabul, Abdullah said his observers have not taken part in the recount process and any results in the absence of them would be “illegitimate.”
He said that there were still 300,000 votes that were fraudulent or didn’t meet the criteria but considered valid by the Independent Election Commission.
Abdullah, who became chief executive of National Unity Government following a disputed election in 2014, said that national interests at that time suggested to avoid conflict.
“Today, national interests suggest that fraudulent votes must be removed,” Abdullah said.
He said that there would be no compromise this time.
“Election results will be based only on clean votes, we don't support crisis, but if there is any crisis, fraud team whose name is State Builder will be responsible for it,” Abdullah warned.
In his speech, Abdullah also criticized that some individuals had been threatened by security forces for expressing their thoughts including those backing Taliban’s stance on peace issue.
Tags:
National interests suggest removal of fraudulent votes, no compromise this time: Abdullah
Source : Afghan Voice Agency(AVA)
Sunday 10 November 2019 13:28
Story Code: 195238 Copy text available
Taliban yet to decide to hold peace talks with the government and Afghan nation: Abdullah
Commander of the US CENTCOM visits Afghanistan
Kerala ISIS leader reportedly killed in Afghanistan by US forces
Withdrawal of foreign forces ‘not the end of the world’ for Afghanistan: Abdullah
The Afghan government is failing to deliver on its promises
Featured news
Abdullah will soon finalize list of ministerial nominees: spokesman
12 Taliban militants killed in Daikundi
Civilian Airport To Be Built In Nangarhar
COVID-19 Deaths Cross 1,000 In Afghanistan
Pakistan Opens Angoor Adda, Kharlachi Crossings
Over 500 Taliban-Requested Detainees May Not Be Released: Sediqqi
1
Strong and positive signal needed in Afghanistan's anti-corruption efforts: donors
2
‘Russian bounties’: payback or White House incompetence?
3
Taliban: ‘Anti-Peace’ Circles Drawing Links To Uzbek Jihadist Group
4
President Ghani Appoints New Envoy for Pakistan
5
Kabul To Host Third International Meeting On Peace
6
Sapidar Palace Surprised By New Governor Appointments
7
Ghani: 'Afghan People Will Have Final Say on Peace Process'
8
Dispute Over 592 Taliban Prisoners Solved: Source
9
Taliban Urged to End Violence Amid Hopes for Intra-Afghan Talks
10
MoFA: Families Should Identify Bodies Of Those Drowned In Turkey