China Talking to ‘All Parties’ Ahead of Afghan Talks

China’s Foreign Ministry spokesperson Geng Shuang on Monday at a press conference said that his government “maintains communication with all parties concerned over holding the intra-Afghan talks in China." 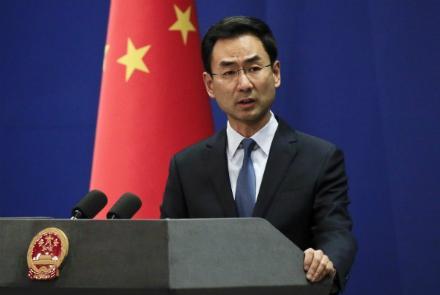 China firmly supports the comprehensive and inclusive 'Afghan-led, Afghan-owned' peace reconciliation process and supports constructive dialogue between all parties concerned, including the Afghan government and the Taliban,” he said.
“China is willing to provide a platform for dialogue and exchanges between the parties concerned in the Afghan issue and help with advancing the peace reconciliation process in Afghanistan on the basis of respecting the wishes of all related parties,” he added.
A meeting was originally scheduled for October 29 and 30, but the Afghan government asked China to delay the meeting for unknown reasons.
The Taliban announced that they were invited by the Chinese government and that a delegation from the group, led by the Taliban’s senior leader Mullah Abdul Ghani Baradar, will attend the meeting.
On Monday, Ismail Khan, a former Mujahideen leader and a prominent member of the Jamiat-e-Islami party, said that the government has not yet finalized the list of attendees for the China meeting on Afghan peace that is expected to take place soon.
Seven people from the government and 18 representatives from political parties will be on the list, Ismail Khan told TOLOnews.
But last week, Wahid Omar, President Ashraf Ghani's senior advisor for public and strategic affairs, said that the Afghan government did have a finalized list of participants and that it is “very short,” but will represent the entire government and all Afghans.
“The delegation from the government is finalized and we talked to all sides to form a delegation that would be clear and beneficial,” Omar said.
The China meeting is expected to happen on November 21 in Beijing, according to sources at the Presidential Palace.
Tags:
China Talking to ‘All Parties’ Ahead of Afghan Talks
Source : tolo news
Tuesday 12 November 2019 12:23
Story Code: 195454 Copy text available
Featured news
President's authorities would be restricted if election headed to runoff: Abdullah
Peace is difficult to achieve unless Pakistan supports: Afghan minister
US top Gen. Miller stresses on ramping up military operations against Taliban
Parliament Passes Italy Loan for Railway Project
Seven Police Forces Killed in Taliban’s Attack in Kunduz
SIGAR: US officials have ‘routinely’ lied over Afghan war
1
Pakistani National Working For Taliban Killed in Northeastern Afghanistan
2
Qatar's Emir Sheikh Tamim to visit Iran for talks
3
Trump may reduce troops in Afghanistan without Taliban deal
4
Iran Briefly Arrests British Envoy for Involvement in Tehran Unrest
5
Ex-Afghan President Karzai Meets Ailing Nawaz Sharif in London
6
Iran welcomes global cooperation on plane crash investigation: President Rouhani
7
‘Ceasefire’ Is Government’s Plan For Start of Peace Talks: Sediqi
8
Two US soldiers killed by Afghanistan Roadside Bomb
9
Trump: US troops won’t leave Iraq unless it pays for ‘money we put in’
10
Taliban Militants Killed in Kandahar Strike