Iran has begun rationing on the purchase of gasoline and substantially increased the price of fuel in a move to assist the needy. 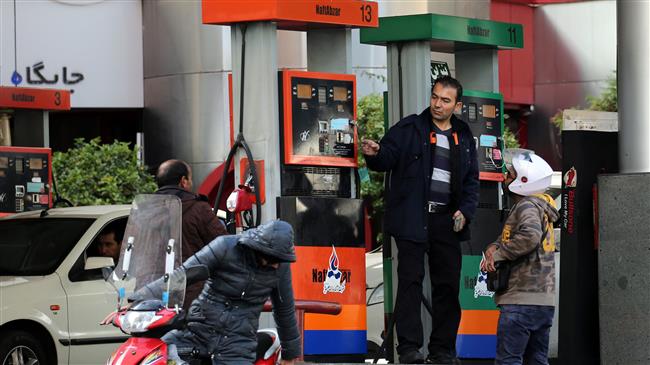 The National Iranian Oil Products Distribution Company (NIOPDC) said in a statement late Thursday that the price of a liter of regular gasoline had gone up to 15,000 rials (12.7 US cents) from 10,000 rials and the monthly ration for each private automobile was set at 60 liters per month. Additional purchases would cost 30,000 rials per liter.
It added that taxis and ambulances will have a 400-liter and 500-liter monthly quota, respectively. The price of CNG and gas oil will remain unchanged.
It noted that rations will be charged to consumers’ personal fuel card on Friday and can accumulate up to six months.
According to the statement, online app-based transportation vehicles will also receive rations.
Iran's Vice President and Head of the Plan and Budget Organization Mohammad Baqer Nobakht said the revenues from the price hikes would be used to fund additional subsidies for 18 million families, or about 60 million people.
Meanwhile, Iranian President Hassan Rouhani on Friday said the government has no intention to receive any portion of the hike despite the economic woes in the country.
He added that the government's move to increase the gasoline prices would be beneficial to the Iranian people, particularly those who are going through economic hardships.
The NIOPDC said in August that motorists have to use smart cards to buy fuel as the government moves to restore a system which could ration gasoline and diesel amid prices that have caused a surge in trafficking to neighboring countries.
The “fuel card” scheme was introduced in 2007 as part of the government plans to cut spending on fuel subsidies and use it in infrastructure programs. Under the old system, motorists had been assigned with 60 liters of gasoline each month that they could buy at a heavily subsidized price at gas stations.