The 50th anniversary of Afghan-Australian diplomatic relations was commemorated by a film festival in Canberra that began on Friday. 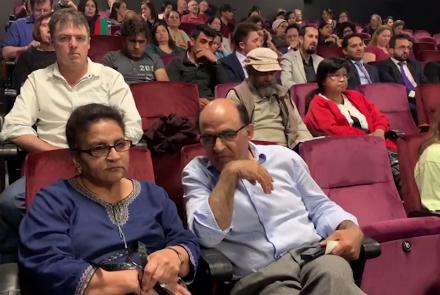 The festival, which runs from November 15 – 21 at the Australian National University in Canberra, was organized by the Afghan embassy in Australia and the ANU Film Group, and offers screenings of ten feature films and documentaries from Afghanistan over seven days.
Some festival participants said the role of such festivals is crucial to communicating the truth of Afghan culture, civilization and the current situation.
“Whatever the film is – whether it is short or long - it will better introduce our society to other countries,” said Salam Sangi, an actor.
“This festival is very important for us to present the positive aspects of Afghan culture to the world,” said Maryam Zahid, head of the Afghan Women's Movement in Australia.
A number of Afghan diplomats and other dignitaries attended the festival.
“The festival is one of the most popular forms of expressing Afghan culture to the Australian people,” said Wahidullah Waissi, the Afghan ambassador to Australia.
“The movies of tonight … moved many people. It helps to understand so many issues that our societies face during these days. I think the culture and history of Afghanistan, the civilization of Afghanistan, needs to be spread and promoted,” said Karim Medrek, the Moroccan Ambassador to Australia.
Other festival participants said such programs can change perceptions of Afghanistan.
Tags:
Afghan Film Festival Opens In Australia
Source : tolo news
Saturday 16 November 2019 09:46
Story Code: 195708 Copy text available
Featured news
Taliban: Hanafi Jurisprudence In Talks Is Not Prejudice Against Shia Brothers
NATO-EU Affirms Continued Cooperation to Afghanistan ‘Long-Term Stability’
Afghanistan: 35 of 267 Cases Test Positive for COVID-19
Hasty International Withdrawal From Afghanistan Would Be Unwise: Pakistan PM Khan
2 New Polio Cases Reported In Badakhshan
Dubai police bust drug-traffickers' gang, seize 9kg of crystal and hashish