A group of Farah residents gathered in Farah city on Sunday to protest the killing of nine civilians who they claim were targeted in an airstrike in Posht Rod district on Saturday. 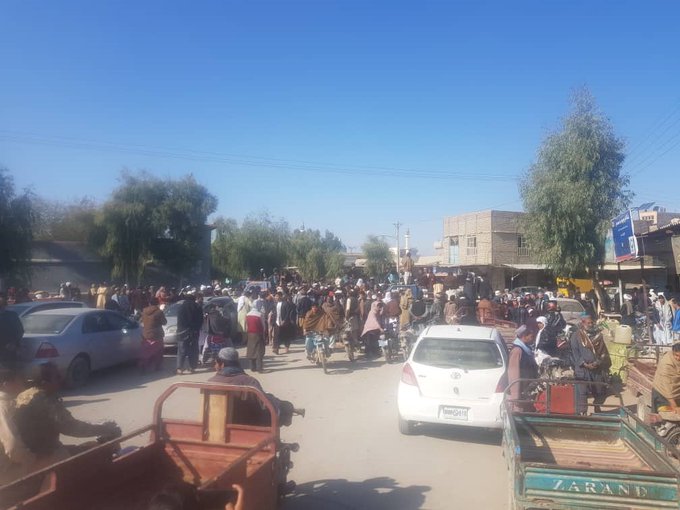 They brought the bodies on Saturday evening to the governor’s office and called for an investigation into the incident.
The residents also claimed that seven others were wounded.
“One of them is my son, others are relatives. Why were we hit like this?” asked an angry protestor.
“They were martyred last evening,” another protestor said.
One person interviewed said the attack happened as some locals were returning to their homes after evening prayers.
“Almost 20 to 30 people were standing outside a mosque after praying when the airstrike occurred,” said one resident.
A hospital official said they received a number of dead and wounded on Saturday evening.
“Five wounded and eight dead were taken to the provincial hospital on Saturday evening. One child is among the wounded and is in critical condition,” said Abdul Hakim Rasuli, head of the Farah provincial hospital.
A local official confirmed that two separate operations were carried out in Posht Rod and Gulistan districts of Farah, but none of the officials confirmed the civilian casualties.
“We call on the president and the central government to prevent such incidents from happening again. You can see in the hospital that all of the victims are vulnerable people,” said Khair Mohammad Nawrozi, a member of the Farah Provincial Council.
This comes as civilian casualties in Afghanistan are on the rise, according to a UN report published in mid-October.
The United Nations Assistance Mission in Afghanistan reported that in the first nine months of 2019 the UN documented 2,563 civilians killed and 5,676 injured, which is similar to the same period from last year; however, in the third quarter—July 1 to September 30--UNAMA documented an unprecedented spike in civilian casualties, with 1,174 civilian deaths and 3,139 injured.
Sunday 24 November 2019 17:14
Story Code: 196226 Copy text available
Featured news
President Trump and PM Khan Discuss Afghanistan at Davos
Afghanistan Imports $7.5m Fuel from Kazakhstan
Afghan parliament approves 2020 budget
Omani FM Holds Talks with Zarif during Iran Visit
Militants kill 36 civilians in Burkina Faso market attack
Pyongyang ‘no longer bound by commitments’ as US missed deadline
1
India’s Citizenship Given to 914 Afghans in Past 6 Years: Indian Officials
2
Forty year old man arrested on charges of forced marriage to 8 year old girl – Baghlan
3
Female Journalists in Herat Claim Threats Have Increased
4
Four members of a family brutally butchered in Kabul
5
Fifteen Afghan civilians killed or wounded in Herat airstrike: rights group
6
Turkmenistan preparing humanitarian aid program for Afghanistan
7
Taliban Closes Health Centers In Nangarhar Districts
8
Disabled Afghan girl makes living by selling paintings