Reports of violence against women in Helmand province have increased by 20% from last year, the provincial directorate of Women’s Affairs said. 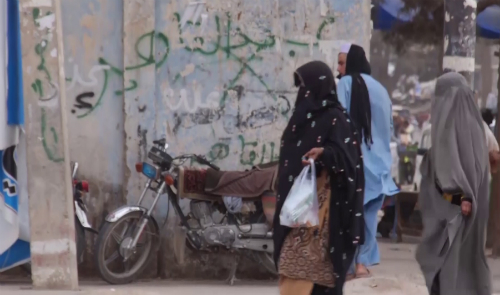 The directorate said that 95 cases of violence against women have been recorded in the province over the past eight months. The cases include running away from home, murder, forced marriage and divorce.
“The only way to fight violence against women is to raise public awareness and make people aware of the legal and Islamic issues surrounding women’s rights. Some families might not be aware of women’s rights,” said the Helmand Women’s Affairs director, Wajiah Rasuli.
Gul Sika (a given name), a 25-year-old woman from Helmand, said she was forcibly married to an old man, so she ran away.
“My father forced me to marry the man. I was not informed about this. I was beaten both in my father’s house and in my husband’s; therefore, I made this decision,” she said.
Gul Sika last week visited the Helmand Directorate of Women’s Affairs to part ways with her husband.
“I want a divorce. I wanted to go to school but I was not allowed. I was asked to stay at home,” she added.
Some religious scholars in Helmand said forced marriage has no place in Islam.
“The nikah (marriage ceremony) in which a girl is not consulted is not right. These consultations are about a matching in age and the satisfaction of the two sides,” said Mohammad Wali Dost, a religious scholar.
Recently a study released by the Afghanistan Independent Human Rights Commission (AIHRC) claimed that reported violence against women in the country has increased 8 percent this year, with 2,762 cases.
The report, which was made public at a gathering in Kabul on Saturday, compares 2,536 cases of violence against women over seven months of the last solar year—March 2018 to September 2018–with 2,762 cases from the same period this year.
According to the report, 123 of the cases allege sexual violence, and this a one percent increase from the same period last year. 485 cases are “economically-related violence,” which is a 14 percent increase from last year.
Also, 1,400 of the cases are identified as acts of verbal or psychological abuse, which is a 37 percent increase compared with the same period in 2018.
Tags:
Violence Against Women Increases in Helmand: Official
Source : Afghan Voice Agency(AVA)
Saturday 30 November 2019 13:06
Story Code: 196738 Copy text available
Without Security, Justice Cannot Be Served: Officials
Over 50 Taliban Killed in Ghazni Offensive: Officials
Gaza patients suffer worst shortage of medicine since 2006
Taliban kidnap two women in Ghazni: Afghan officials
Wheat Products Decreased By 16% Last Year: Official
Featured news
COVID-19: MoPH Reported 28 New Deaths In the Past 24 Hours
Taliban attacks kill 19 Afghan forces in Kunduz, Badakhshan provinces
Coronavirus warning from Italy: Effects of COVID-19 could be worse than first thought
Pakistani Militia Working With Taliban In Paktia Says Official
Nearly three-quarters of Afghan children want to return to school: survey
Oil prices down with record new virus cases in US state
1
Reporters Without Borders Condemns Arrests, Harassment Of Journalists
2
MoPH Says COVID-19 Cases Decreased By 40% As Tally Reaches 33,908
3
COVID-19 Deaths Cross 1,000 In Afghanistan
4
WFP receives $49m from USAID to help feed vulnerable Afghans
5
Civilian Airport To Be Built In Nangarhar
6
Majority of Afghan lawmakers catch coronavirus
7
Deputy Minister of Information and Culture Survives Armed Attack
8
23 Civilians Killed Last Week: NSC
9
Coronavirus has pushed a million in Afghanistan to brink of famine: Oxfam
10
Global COVID-19 Cases Rise to More Than 12 Million