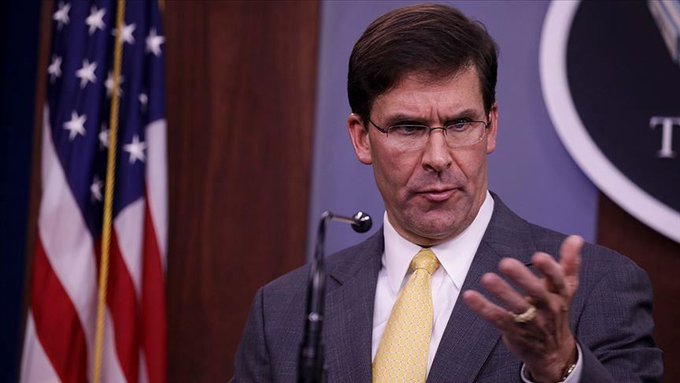 Secretary of Defense Mark Esper denied Monday reports the U.S military is preparing to leave Iraq after the parliament there voted to expel U.S. forces.
The denial came after several news outlets reported on an alleged letter from Marine Corps Gen. William Seely, who oversees Iraq operations, notifying Iraqi officials of U.S.-led coalition plans to leave the country.
Esper denied any knowledge of the letter, and told reporters at the Pentagon that the Defense Department was looking into the matter.
"We're trying to find out where that's coming from, what that is," he said. "But there's been no decision made to leave Iraq. Period."
In the letter, Seely writes to Abdul Amir, the deputy director of Iraq's joint operations command, notifying him that the U.S.-led coalition "will be repositioning forces over the course of the coming days and weeks to prepare for onward movement."
Seely reportedly cited in particular Sunday's Iraqi parliament vote in which lawmakers voted to demand the removal of U.S. and foreign forces from the country following a U.S. airstrike that killed Iran's chief military commander in Baghdad.
"We respect your sovereign decision to order our departure," Seely wrote in the letter, copies of which made the rounds on social media.
The authenticity of the letter could not be immediately verified by Anadolu Agency.
Adel Abdul Mahdi, Iraq's caretaker premier, notified the U.S. envoy to the country on Monday of the parliament's recent decision.
The prime minister emphasized the necessity of joint action to "implement the withdrawal of foreign forces in accordance with the decision of the Iraqi parliament," according to a statement released by his office following Mahdi's meeting with Matthew Tueller.

Mahdi emphasized the "seriousness of the current situation and its possible repercussions", stressing that Baghdad was making "every effort" to prevent a "slide into an open war."
The meeting came after Qasem Soleimani, the head of Iran's Revolutionary Guards' elite Quds Force, was killed in a U.S. drone strike in Iraq on Friday.

His death marked a dramatic escalation in tensions between the U.S. and Iran, which have often been at a fever pitch since U.S. President Donald Trump chose in 2018 to unilaterally withdraw Washington from a 2015 nuclear pact world powers struck with Tehran.

Iranian Supreme Leader Ali Khamenei, who gave Soleimani the country's highest honor last year, vowed "severe retaliation" in response to his killing.
The Pentagon accused Soleimani of plotting an attack on the U.S. embassy last week, and planning to carry out additional attacks on U.S. diplomats and service members in Iraq and the region that officials have said would have resulted in the loss of hundreds of lives.
The Trump administration has not made public any intelligence it used as the basis for carrying out Soleimani's killing.
Tags:
US defense chief denies reports of Iraq withdrawal
Source : Afghan Voice Agency(AVA)
Tuesday 7 January 2020 10:28
Story Code: 199934 Copy text available
Featured news
Afghanistan faces humanitarian disaster as COVID-19 spreads undetected: IRC
Stefano Pontecorvo takes office as NATO’s CSR in Afghanistan
Afghan Traders Suffers Losses; Demand Clearance of Transit Cargo in Pakistan
545 New COVID-19 Cases Reported in Afghanistan
UN Chief Thanks Qatar Amir for Humanitarian Aid to Kabul
Australian soldiers formally accused of war crimes in Afghanistan
1
India should tie up with allies to play the ‘Great Game’ in Afghanistan
2
Seven Afghan local soldiers killed in Taliban attack in Parwan: official
3
Inaugural US-Afghanistan-Uzbekistan trilateral meeting held via video link
4
Protests flare across US over police killing of African Americans
5
Pullout of 8,000 Troops by November Not Only Option: Esper
6
UN Security Council ‘will not Lift’ Taliban Sanctions: Russian Envoy
7
NATO Deputy Secretary-General: ‘Fully Committed’ to Afghanistan
8
Afghanistan's Mass Release Of Taliban Prisoners Revives Peace Process, But Seen As 'Big Gamble'
9
Taliban Rubbishes Claim of ‘Turmoil, Infection and Discord’ Among Senior Leaders
10
If Trump is serious about getting out of Afghanistan, he should do it now, not next summer