Putin is on visit to Syria, has held talks with Assad – Kremlin

Russian President Vladimir Putin has made a surprise visit to Damascus, holding talks with his Syrian counterpart, Bashar Assad, at the Russian military command center. 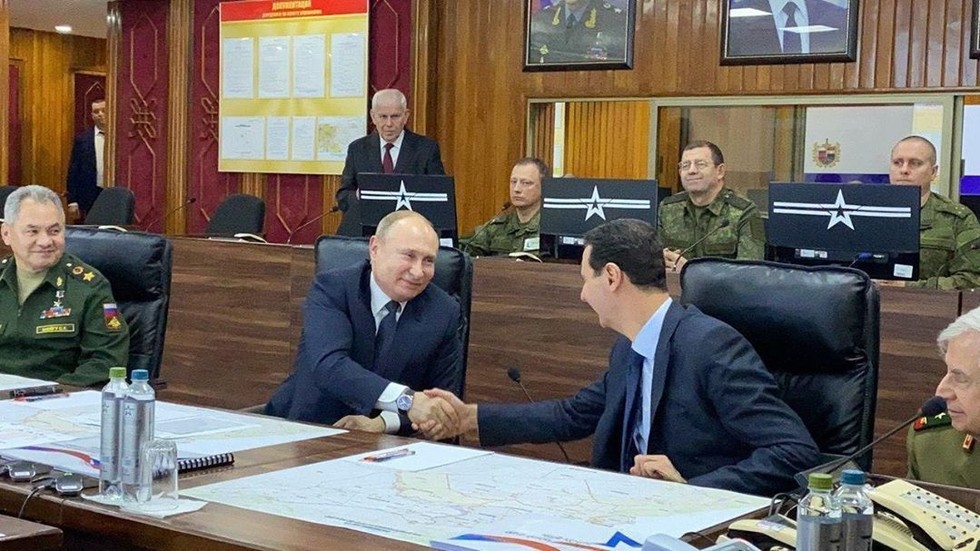 Putin “rode through the streets of Damascus” on his way to the command center, where he headed after landing at the city’s airport, Kremlin Press Secretary Dmitry Peskov said.
The Russian president met with Assad there as the two leaders listened to reports by military officials on the conditions on the ground in various regions of the country. Russia has been assisting Syria in the fight against terrorists since 2014.
During their meeting, Putin told Assad that “the signs of peaceful life are visible to the naked eye on the streets of Damascus,” Peskov said.
The Russian president also said that it can now safely be said that “a huge distance has been passed on the way to restoring Syria’s statehood and territorial integrity.”
Putin last visited Syria in 2017 when he inspected Russia’s Khmeimim Air Base in the western Latakia Province.
Tags:
Putin is on visit to Syria, has held talks with Assad – Kremlin
Source : Afghan Voice Agency(AVA)
Tuesday 7 January 2020 19:17
Story Code: 200012 Copy text available
Featured news
325,000 Afghan refugees returned home over past four months: ministry
Turkey and Pakistan to ‘Enhance’ Bilateral Cooperation Against COVID-19
Afghanistan Reports 658 New COVID-19 Cases
Russia: 4 servicemen killed in helicopter hard landing
162 New COVID-19 Cases Reported in Herat and Balkh
US Welcomes Ghani's Pledge to Release Prisoners
1
Findings from Afghanistan war crimes investigation will cause 'distress' for some elite soldiers, judge warns
2
US and Iran attend Six Plus Two meeting on Afghanistan
3
‘Key' Taliban Member Arrested in Herat by NDS
4
Taliban Killed, Wounded 576 Afghan Civilians In 30 Provinces During Ramadan: ONSC
5
Airstrike kills 6 Taliban militants a day after similar raids killed 31 in Jawzjan
6
Peace Talks Ensure Afghanistan not a ‘Safe Harbour’ for Terrorists: US State Department
7
Around 2,000 Taliban prisoners to be released
8
Afghan leaders condole deaths in plane crash in Karachi city of Pakistan
9
US Secretary of State Urges Afghan Gov’t, Taliban to Refrain From Violence After Eid Ceasefire
10
Pentagon Report Suggests the US-Taliban Deal Was Inked in Afghan Blood