Syria has expressed its “absolute solidarity” with Iran in the Islamic Republic’s right to respond to US aggression in light of assassination of Lieutenant General Qassem Soleimani, the commander of the Quds Force of Iran’s Islamic Revolution Guards Corps (IRGC), and the second-in-command of Iraqi Popular Mobilization Units (PMU), Abu Mahdi al-Muhandis. 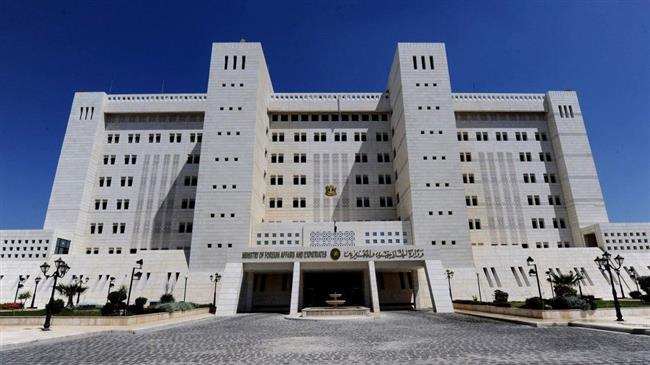 “The Syrian Arab Republic announces its full solidarity with the brotherly people of Iran in what they are facing, and it affirms Iran’s right to defend itself in the face of the US threats and attacks,” Syria’s official news agency SANA quoted an unnamed official source at the Syrian Ministry of Foreign Affairs and Expatriates said on Wednesday.
“Syria at the same time holds the US administration responsible for all the developments that are taking shape due to the latter’s reckless policy and arrogant mentality. Such a policy governs US acts that could be best described as those of gangs rather than states,” the source pointed out.
He added Washington should learn how to abandon its approach of subjugation and attempts to impose its hegemony on others.

The Syrian foreign ministry concluded, “The Syrian Arab Republic affirms that free states reserve the right to respond to any act of aggression against them in whatever manner they find suitable.
“The US should learn how to give up its approach of subjugating others and imposing its hegemony. Syria reiterates that the US administration is the foremost entity responsible for the escalation of strife and turmoil in the region.”

On January 3, Syrian President Bashar al-Assad condoled Iran over the assassination of Lt. Gen. Soleimani, saying that the late commander’s support for Syria will always be remembered by the Syrian nation.
In a message to Leader of the Islamic Revolution Ayatollah Seyyed Ali Khamenei, the Syrian president expressed his and “the Arab people of Syria’s warmest condolences” to the Leader and the Iranian nation.

Assad said the Syrian people would never forget Lieutenant General Soleimani’s support for the Syrian Arab Army in defense of Syria and against terrorism.
Describing the assassination of Soleimani as a “criminal act” serving “Zionist and imperialist designs,” Assad said his martyrdom would strengthen the will of the resistance axis.
Early on Wednesday, Iran’s Islamic Revolution Guards Corps (IRGC) targeted the US airbase of Ain al-Assad in Anbar province in western Iraq after launching a wave of attacks to retaliate the US assassination of Lt. Gen. Soleimani.
“Tens of surface-to-surface missiles” were fired at the strategic airbase and the attack was later confirmed by the US officials.

The IRGC has called for a complete withdrawal of US troops from the Arab country, asserting that it would not differentiate between the US and Israel in retaliating against the assassination of the Iranian national hero.
“We warn US allies providing bases for the [American] terrorist army… that any country serving as the origin of bellicose and aggressive attacks in any form against the Islamic Republic of Iran will be targeted,” read the IRGC statement.
The IRGC added that it would release more details about the strike.

The strike comes as no surprise since Iran had vowed to take a “harsh revenge” in the wake of the US terror attack that led to the martyrdom of Lt. Gen. Soleimani, the second-in-command of Iraqi Popular Mobilization Units (PMU), Abu Mahdi al-Muhandis, and their companions near Baghdad International Airport on January 3.