The administration of US President Donald Trump has imposed new sanctions on Iran targeting the country’s metals sector and several of its government officials following Tehran’s retaliation for the assassination of Iranian Lieutenant General Qassem Soleimani. 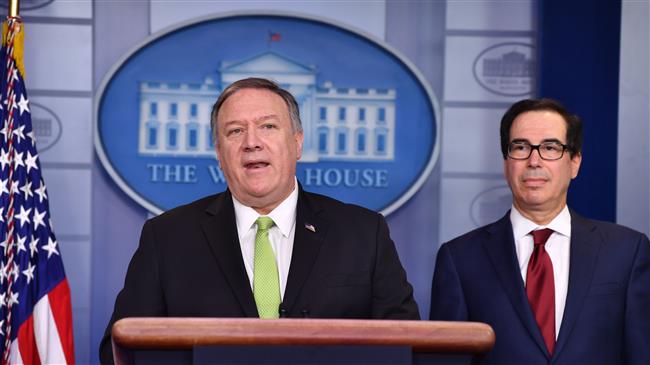 US Secretary of State Mike Pompeo and Treasury Secretary Steven Mnuchin announced the new measures at a press conference at the White House on Friday.
The sanctions were initially promised by Trump on Wednesday after Iran launched more than a dozen missiles on two airbases in Iraq housing US troops.
The new sanctions targeted the Iranian aluminum, copper, iron and steel industries. Washington also imposed bans on eight senior Iranian officials, saying they were involved in the missile strike on the bases housing American troops.
“We are announcing additional sanctions on the Iranian regime as a result of the attack on U.S. and allied troops,” Mnuchin said. “Today’s sanctions are part of our commitment to stop the Iranian regime’s global terrorist activities.”
“I think we have 100 percent confidence and we are consistent in our view that the economic sanctions are working,” Mnuchin said. “That if we didn’t have these sanctions in place, literally Iran would have tens of billions of dollars. They would be using that for terrorist activities throughout the region and to enable them to do more bad things.”
The Trump administration’s latest baseless accusations against Iran come after the US military launched a terrorist strike on Iran’s most prominent anti-terror commander in Iraq on January 3.
The US military carried out an airstrike on the direction of Trump at Baghdad’s international airport early on Friday, assassinating General Soleimani and the second-in-command of Iraq's Popular Mobilization Units (PMU), Abu Mahdi al-Muhandis, as well as eight other companions.
Early on Wednesday, Iran responded to the assassination, striking the American airbase of Ain al-Assad in Anbar province in western Iraq and another in Erbil, the capital of Iraq's semi-autonomous Kurdistan region.
Iran’s missile attack on US bases in Iraq was in defiance of Trump's threats to Iran not to retaliate and presents him with the biggest crisis of his presidency to date, according to an editorial by CNN.
The vast majority of Americans say the US assassination of Qassem Soleimani has made America less safe and shows that Trump's behavior with Iran is "reckless," according to a new poll.
The USA Today/Ipsos poll found that Americans, by 55%-24%, said they believe the killing has made the United States less safe, rejecting a fundamental argument the Trump administration has made.
The poll also found that a majority of those surveyed, by 52%-34%, called Trump's behavior with Iran "reckless."