Iraqis must resort to resistance if US forces refuse to pull out: Senior Nujaba official

The deputy secretary general of Iraq’s al-Nujaba Movement says the Iraqi nation must choose the path of resistance in case the parliamentary bill demanding the withdrawal of all US-led foreign military forces from the country is not implemented. 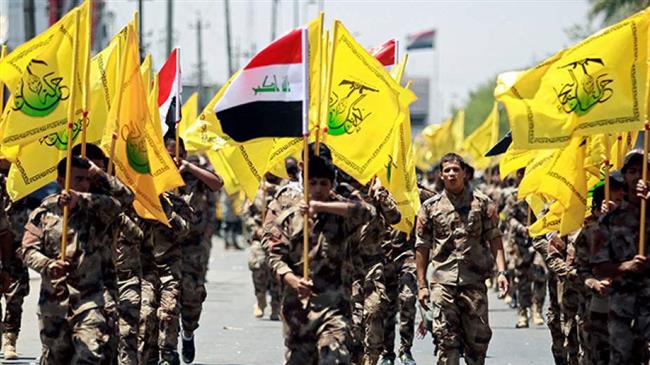 “The Iraqi people must opt for the path of resistance unless the parliament’s decision on the pullout of foreign forces is carried out,” Nasr al-Shammari said in an exclusive interview with Lebanon-based Arabic-language al-Mayadeen television news network on Tuesday.
He added that the decision to expel foreign forces from Iraq does not need a parliamentary mandate, stating that the US-led military coalition purportedly fighting the Daesh terrorist group entered Iraq at the request of Baghdad government and can be removed by a letter from the government as well.

“The decision concerning the removal of foreign forces from Iraq is the only decision taken away from sectarian fault lines. A person of sound mind cannot accept the presence of a foreign state that imposes its own authority on a sovereign country. If getting foreign forces out of Iraq is a charge, then we consider it as an honor for ourselves, our children and our grandchildren,”  Shammari pointed out.
He then noted that all Iraqi resistance factions are united to end the presence of foreign troops in the country, saying, “The United States must respect the sovereignty of states and decisions of peoples, and adhere to them.”
“Iraq will not accept being ruled by any country. Any failure to implement the parliament decision on the withdrawal of foreign forces will give the green light for the start of resistance operations,” Shammari highlighted.
The Nujaba official went on to say that Popular Mobilization Units (PMU), better known by the Arabic word Hashd al-Sha’abi, have become more coherent and solid in the wake of the recent US assassination of the second-in-command of PMU, Abu Mahdi al-Muhandis.
“The death of Muhandis does not mean the end of Hashd al-Sha’abi and its role in the region,” Shammari said.
He added that Iraqi resistance groups are indebted to Lieutenant General Qassem Soleimani, the commander of the Quds Force of Iran’s Islamic Revolution Guards Corps (IRGC).
“The resistance against US forces will soon attain its goal of removing foreign troops from the Iraqi soil. The blood of martyrs will finally bring about the demise of the Zionist entity, and the end of its occupation of Arab lands,” Shammari concluded.
Baghdad moving to internationally prosecute US for crimes in Iraq
Meanwhile, a member of the Iraqi Parliamentary Human Rights Committee said the Baghdad government was preparing to prosecute the United States at international courts of law for its crimes in Iraq, noting that the offenses amount to genocide.
“The United States has been committing the most heinous war crimes since 2003 up until now. The invasion of Iraq, the Abu Ghraib prisoner abuse, the Nisour Square massacre and the emergence of Daesh (Takfiri terrorist group) besides the attack on the leaders of Hashd al-Sha’abi are all crimes classified as genocide,” Ahmed al-Kanani said in a statement on Tuesday.
Kanani added, “All the crimes that America has perpetrated against the Iraqi nation are documented, and that there are bids to prosecute Washington for its crimes against Iraqis before international courts.”
On January 5, Iraqi lawmakers unanimously approved a bill, demanding the withdrawal of all foreign military forces led by the United States from the country.
Late on January 9, Iraq’s caretaker Prime Minister Adel Abdul-Mahdi called on the United States to dispatch a delegation to Baghdad tasked with formulating a mechanism for the withdrawal of US troops from the country.
According to a statement released by the Iraqi premier’s office, Abdul-Mahdi “requested that delegates be sent to Iraq to set the mechanisms to implement the parliament's decision for the secure withdrawal of (foreign) forces from Iraq” in a phone call with US Secretary of State Mike Pompeo.
The prime minister said Iraq rejects violation of its sovereignty, particularly the US military's violation of Iraqi airspace in the airstrike that assassinated Lt. Gen. Soleimani, Muhandis and their companions.

Abdul-Mahdi asked Pompeo to “send delegates to Iraq to prepare a mechanism to carry out the parliament’s resolution regarding the withdrawal of foreign troops from Iraq,” the statement said.
“The prime minister said American forces had entered Iraq and drones are flying in its airspace without permission from Iraqi authorities and this was a violation of the bilateral agreements,” the statement added.

The US State Department bluntly rejected the request the following day.