The impeachment trial against U.S. President Donald Trump kicked off Tuesday in the Senate as the chamber debated, and would later vote on, a resolution stipulating rules guiding the process. 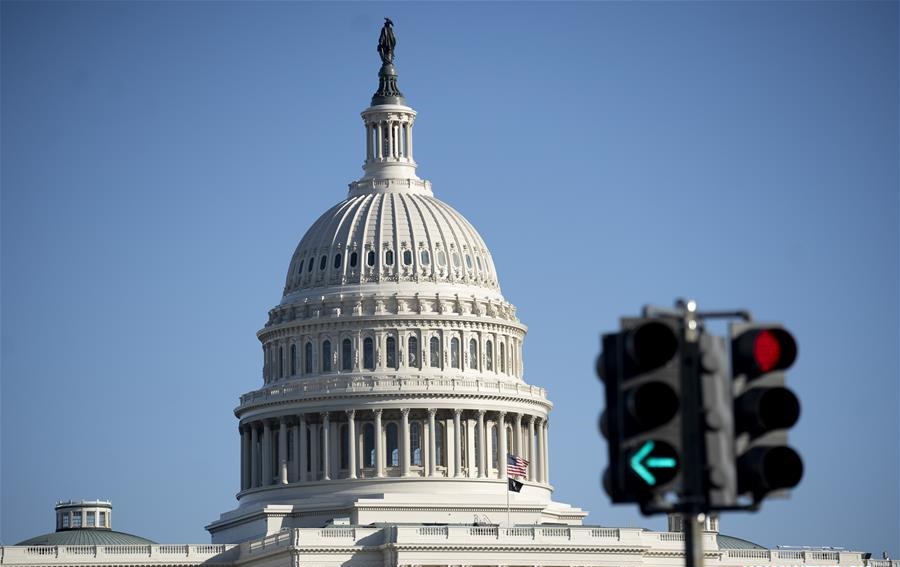 With Supreme Court Chief Justice John Roberts presiding over the session and the Senate clerk finishing reading the draft resolution proposed by Senate Majority Leader Mitch McConnell, the two opposing sides - House managers as prosecutors and Trump's legal defense team - debated the trial rules.
Speaking on the Senate floor on behalf of the lawyers representing Trump in the trial, White House Counsel Pat Cipollone defended McConnell's draft resolution. "We support this resolution. It is a fair way to proceed with this trial," he said.
In a last-minute change to his original resolution, McConnell extended the duration of the 24-hour time slot granted to each of the two opposing sides in President Donald Trump's impeachment trial for their opening statements from two days to three days. The resolution was firmly opposed by Democrats.
"We believe that once you hear the initial presentations, the only conclusion will be that the president has done absolutely nothing wrong, and that these articles of impeachment do not begin to approach the standard required by the Constitution," said Cipollone.
Trump was impeached in December by the Democratic-controlled House, which passed two articles of impeachment accusing him of abuse of power and obstruction of Congress.
House Intelligence Committee Chairman Adam Schiff, who has led the House impeachment inquiry and who now heads the team of House managers, denounced McConnell's proposal, saying "the resolution should allow the House managers to call their witnesses, and then the President should be allowed to do the same and any rebuttal witnesses."
"Why should this trial be different than any other trial? The short answer is it shouldn't. But leader McConnell's resolution would turn the trial process on its head," Schiff, a California Democrat, said, adding that "the president places himself beyond accountability, above the law."
McConnell's four-page resolution does not require additional witnesses to be subpoenaed and does not allow House prosecutors to admit evidence into the Senate trial record until after the opening arguments are heard.
Instead, the resolution allows for a motion to be introduced to dismiss the impeachment charges by a simple majority vote in the Republican-controlled upper chamber.
Democrats had demanded that whether to subpoena new witnesses or request additional documents be decided before the start of the trial. In a statement Monday bashing McConnell's resolution, Senate Minority Leader Chuck Schumer said that he would be "offering amendments to address the many flaws in this deeply unfair proposal and to subpoena the witnesses and documents we have requested."
McConnell in a floor speech Tuesday ahead of the debate vowed to block early votes on witnesses. "If a senator moves to amend the resolution in order to subpoena specific witnesses or documents, I will move to table such motions because the Senate will decide those questions later in the trial," said the Kentucky Republican.
Schumer seized the opportunity of McConnell changing his resolution to press for calling witnesses and producing documents.
"The public is understanding how unfair Senator McConnell's trial rules are and Republican Senators are beginning to tell him to change them," the New York senator said in a statement. "The real test will be if they pressure Senator McConnell to allow witnesses and documents."
Later during the trial, Schumer offered up his first amendment to the resolution, saying that it requested to "subpoena certain documents and records from the White House." The amendment was subsequently debated in the chamber.
"I just took the floor to demand a vote to subpoena the witnesses and documents needed for a fair trial," Schumer tweeted in the meantime. "Will Senate Republicans vote for a fair trial? Or will they enable a cover-up?"