Saleh to Taliban: ‘Why Pakistan Stand Behind You’

The first deputy of the “State Builder” electoral team, Amrullah Saleh says the Taliban group should give information of their relations with Pakistan, as they know all intelligence relations of the Afghan government with the United States. 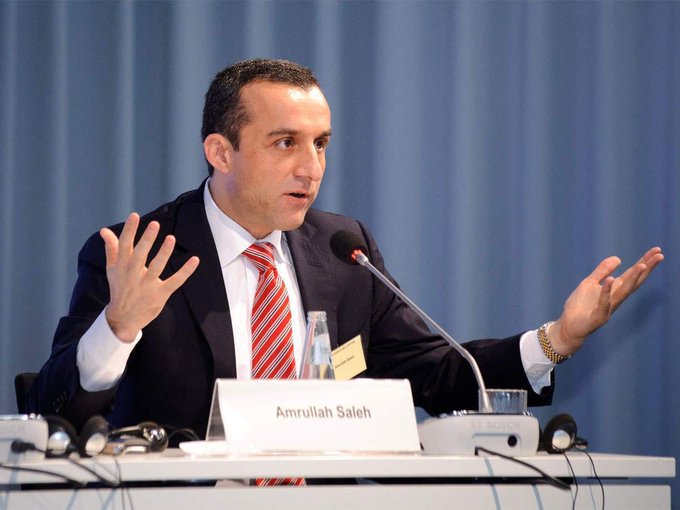 “I am asking the Taliban to dare and say why they have relations with Pakistan, if I am working with US, the result is asphalted road, university, airlines, government system, institutions, army, police, intelligence, defending Afghan culture. Why are you working with ISI?,” the running mate of Ashraf Ghani, Amrullah Saleh said in a peace event at the Institute of War and Peace Studies (IWPS).

He declared that the Taliban claims that they are fighting against the foreigners in Afghanistan are “completely baseless”.
“Taliban are murderers of Afghanistan’s elites, they should answer why they killed them. Pashtuns suffered the most from Taliban over the last 18 years,” he asserted.
Saleh noted that peace talks in Qatar may end war between Taliban and Americans, but it will not end Taliban-Afghanistan fighting.
“No foreigners can reflect our interests in negotiations with Taliban and no foreigners can impose their deal on us,” he said.
Saleh added that the Afghan people will defend their soil and rights if there are foreigners in Afghanistan or not.
Tags:
Saleh to Taliban: ‘Why Pakistan Stand Behind You’
Source : Afghan Voice Agency(AVA)
Thursday 23 January 2020 16:48
Story Code: 201646 Copy text available
Featured news
WFP receives $49m from USAID to help feed vulnerable Afghans
Deputy Minister of Information and Culture Survives Armed Attack
MoFA: Families Should Identify Bodies Of Those Drowned In Turkey
'Life goes on': Brazil's Bolsonaro tests positive for coronavirus
Sapidar Palace Surprised By New Governor Appointments
Taliban truck bomb kills 2, wounds 15 in Kandahar
1
Iraqi officials irate as Saudi daily publishes cartoon against Ayatollah Sistani
2
Russian diplomat says some members of US intelligence involved in Afghan drug trafficking
3
Khalilzad, Qataris, Taliban discuss development opportunities in Afghanistan
4
Khalilzad Discusses Development Plans With Qataris, Taliban
5
Taliban needs to end violence to help kick start intra-Afghan talks: NATO envoy
6
Iraqis rally to decry Saudi paper’s offensive cartoon of Ayatollah Sistani
7
Pakistan invites chief Afghan peace negotiator Abdullah
8
NATO SCR: Taliban Violence ‘Simply Unacceptable’
9
Pak FM talks to Chinese Counterpart; Discusses Afghan Issues
10
Khalilzad releases details of his meetings in Qatar including engagement with Taliban