An American peace advocacy group has collected more than 10,000 signatures for an open letter apologizing to the Iranian nation for the US aggression, particularly President Donald Trump’s “reckless” decision to order the assassination of senior Iranian commander Lieutenant General Qassem Soleimani. 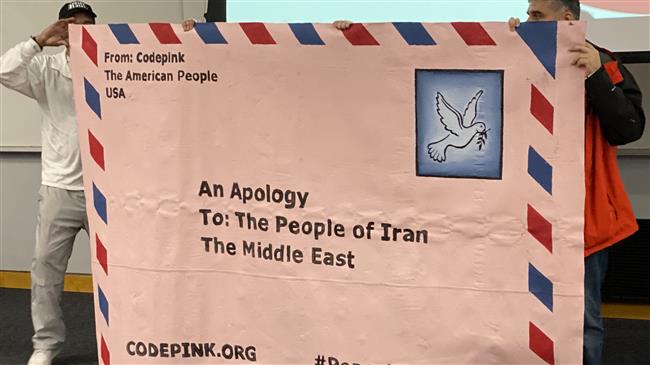 "As Americans committed to peace and the safety of all people, we, the undersigned, apologize for the actions of our reckless, hate-filled president," the letter by CODEPINK reads. The activists further to “do everything we can to stop Trump's aggression, remove the crippling sanctions you are suffering under, and resume a process of diplomacy with your country."
“The American people do not want a war with Iran. We want to live in peace and harmony. Please accept our hand in friendship. May the peacemakers prevail over those who sow hatred and discord.”
The peace advocacy group is sending the letter, both in English and Farsi, and a video version to the Iranian press.
The Farsi version of the apology letter has been read out by Jewish American graduate student Lindsay Saligman, who traveled to Iran in March 2019. She has since worked to promote greater understandings between Iranians and Americans.
President Trump brought the US and Iran to the brink of a military conflict early this month by ordering a drone strike that assassinated General Soleimani in Baghdad.
Soleimani, commander of the Quds Force of Iran's Islamic Revolution Guards Corps, has been hailed in the region for leading the fight against terrorist groups like Daesh.
Iran responded to Trump’s aggression by launching a ballistic-missile attack on American military posts in Iraq.
On Saturday, a coalition of anti-war activists organized protest rallies across the US and the world to slam the Trump administration for “a dangerous escalation of the conflict.”
In a tweet about the demonstrations, CODEPINK co-founder Medea Benjamin warned that war was still a very real possibility. "Think we avoided war with Iran a few weeks ago?" said Benjamin. "Think again. We are still on the brink."
“The rallies, apology letter, congressional bills, city council resolutions--these are all ways that we, as Americans, are trying to stop Trump from taking us into a war with Iran,” said CODEPINK activist Ariel Gold, who visited Iran on a peace delegation in October.
Tags:
CODEPINK General Qassem Soleimani US aggression
Source : خبرگزاری Herat Afghan Voice Agency(AVA)
Monday 27 January 2020 01:17
Story Code: 201961 Copy text available
Iraqis Hold ‘Million-Man March’ against US Military Presence in Baghdad
Imam Khamenei: US disgraced after assassination of Gen. Soleimani
Afghan officials, people sympathize with Iranians over assassination of Gen. Soleimani
Iran's Leader names new Quds commander following Gen. Soleimani's assassination
Who was General Qassem Soleimani?
Featured news
Coronavirus: 6 of 103 Cases Test Positive
How India Came Around to Talking to the Taliban
Afghan Cricketers' Test Match with Australia Postponed
Worldwide coronavirus cases cross 32.34 million, death toll at 983,486​
Ghani, Imran Khan Discuss Afghan Peace, Say Ceasefire Needed
UK Defence Secretary Says They Fought ‘Illegal Wars’ In Afghanistan, Iraq
1
Ghani in UN Speech Reiterates Call for Ceasefire
2
Trump Decisions to Repeat 9/11, Says Former US Security Advisor
3
Abdullah to visit Pakistan, says both sides have ‘grievances’
4
Afghan Forces Repulse Panjshir Attack
5
14 Afghan Forces Killed in A Taliban Attack
6
Khalilzad testifies before House Committee, says pact with Pakistan possible
7
Afghan, Pak Officials Discuss Abdullah’s Upcoming Pakistan Trip
8
Taliban Forced Thousands of Women into Marriage when in Power: Saleh
9
Abdullah: Some Freed Taliban Prisoners Have Returned To The Battlefront
10
Andarabi: Taliban's New Tactic is 'Spreading Chaos' with IEDs