US service member killed in non-combat incident in Afghanistan

A U.S. service member was killed in a "non-combat related incident" in Afghanistan, the Pentagon announced on Thursday. 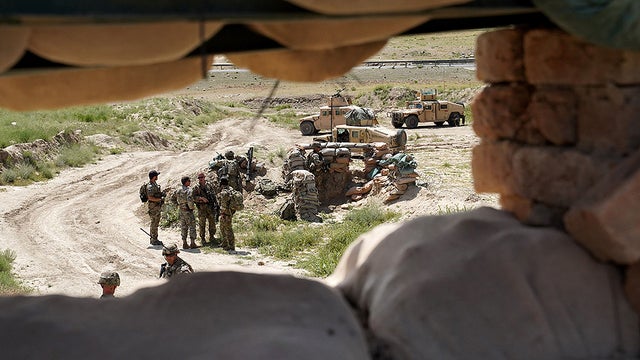 Spc. Branden Tyme Kimball, 21, from Central Point, Ore., died Wednesday at Bagram Airfield, the largest U.S. military base in the country, according to the Defense Department statement.
The statement did not provide further details about the incident but said it is under investigation.
Kimball, who joined the Army in August 2016 and was an aircraft structural repairer, was assigned to 3rd Battalion, 10th Aviation Regiment, 10th Combat Aviation Brigade, based in Fort Drum, N.Y.
He is the seventh U.S. service member to die in Afghanistan in 2020, with four of the deaths combat-related.
Two U.S. soldiers were killed and six service members injured on Saturday when someone wearing an Afghan army uniform opened fire on them and Afghan troops with a machine gun in Nangahar province.
The United States, which has about 14,000 troops in Afghanistan, has been close to a deal with the Taliban to end the 18-year-long war. Talks have been rocky, however, and broke down last year after President Trump called off a planned meeting at Camp David to finalize an agreement after a Taliban attack killed a U.S. service member.
In the latest move forward, Defense Secretary Mark Esper announced Thursday that the United States and the Taliban have negotiated a deal for a seven-day “reduction in violence” in the country.