Dostum refuses to change his mind, despite Khalilzad’s big offer

Amid an intense political rivalry in Kabul, former vice president General Dustom in the north has flatly rejected a proposal by U.S. special envoy, Zalmay Khalilzad, to back Ashraf Ghani’s government in return for the country’s highest military rank. 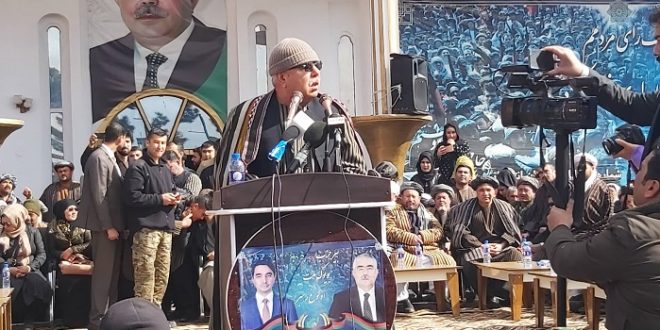 U.S. envoy Khalilzad has offered the position of military marshal to Dustom, which turned down outright, refusing to change his mind about his rejection of President Ghani’s government legitimacy.
Bashir Ahmad Qasani wrote on his Facebook that the position of ‘military marshal’ and deputy chief of staff of army had been offered to General Dustom by Khalilzad, which he denied.
Afghanistan witnessed a strange day last week on Monday when Abdullah and Ghani the were each sworn in as president in separate ceremonies, plunging the country’s political future and reconciliation prospects into chaos – as precarious peace negotiations with the hardline Taliban loom.
President-elect Ashraf Ghani took oath of the office for a second term in the presidential palace, while, at the same time, his main rival for the presidency swore himself setting the foundation of his ‘parallel government’.
This signalled that diplomatic attempts by the U.S. special envoy Zalmay Khalilzad the day earlier to mediate between the political rivals and broker a deal had foundered. The dilemma risks spilling into the impending peace talks with the Taliban – an inevitable fallout of a rancorous wrangling that could culminate in a disaster Afghans cannot afford.
Last week’s U.S.-Taliban peace agreement – hammered out after 18 months of marathon negotiations – offered an olive branch to the people and government of Afghanistan towards an end to the endless war. Nevertheless, two presidents would mean two peace forces, which could potentially complicate and even stymie the reconciliation process.
The two swearing-in ceremonies were held at the same time, with Ghani’s in the presidential palace and Abdullah’s in his palace just next door. The inaugurations, however, fell short of participation of influential political elite such as Hamid Karzai, Abdulrab Rasoul Sayyaf and Gulbuddin Hekmatyar. But, the US envoy Khalilzad, US Chargé d’Affaires Ross Wilson, and US, NATO forces commander Gen. Scott Miller, as well as ambassadors from the EU, Canada, Australia, Denmark, Germany and Norway attended president Ghani’s oath-taking ceremony.