Deal with US Has Been ‘Violated’: Taliban

The Taliban in a statement on Sunday said the deal that they signed with the US on Feb. 29 has been "violated" in clear instances by the United States and its allies. 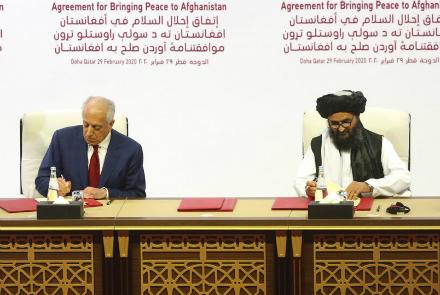 In their statement, the group connected the violation of the deal to the delay in the release of 5,000 prisoners from the Afghan government’s custody and claims of attacks on Taliban targets even in non-combat areas, operations on civilian areas by Afghan and US forces, airstrikes on inappropriate and on civilian areas, attacks on Taliban members in areas where they are not engaged in fighting, and some violations in Kandahar, Helmand, Farah, Kunduz, Nangarhar, Paktia, Badakhshan, Balk and other parts.

The group called on the US to abide by the agreement and to ask its allies to fully implement the accord.
The Taliban in the statement claimed that it has reduced its attacks in cities and has abided by the agreement.
The group says they can attack any outpost of the Afghan government until there is a separate agreement on a ceasefire as a result of intra-Afghan negotiations.

The Taliban in February agreed to a one-week reduction in violence leading up to the signing of the peace deal, during which time attacks by the group were significantly reduced. However, violence increased after a delay in the prisoner release, which was mentioned in the US-Taliban deal.

The Afghan government has agreed on freeing some of the prisoners through a gradual process, and based on other conditions.
Tags:
Deal with US Has Been ‘Violated’: Taliban
Source : Afghan Voice Agency(AVA)
Sunday 5 April 2020 15:21
Story Code: 206995 Copy text available
Prisoner exchange between Kabul and Taliban will begin on March 31
Twenty-three Afghan forces killed in Taliban attacks in north
Donald Trump’s new Afghanistan gambit
10 Civilians Reportedly “Burned by Taliban” in Jawzjan
Multiple airstrikes kill at least 66 Taliban militants in Ghor
Featured news
Afghan central bank's gross reserves rise to $9 billion
Over 2,700 Taliban, 420 government prisoners released so far
SpaceX Rocket Ship Launches with 2 American Astronauts
Taliban Rubbishes Claim of ‘Turmoil, Infection and Discord’ Among Senior Leaders
COVID-19 Cases Over 15,000 in Afghanistan
3 Civilians Killed in Shelling in Parwan
1
India should tie up with allies to play the ‘Great Game’ in Afghanistan
2
Seven Afghan local soldiers killed in Taliban attack in Parwan: official
3
COVID-19: More than 12,000 Cases in Afghanistan
4
How the Taliban Outlasted a Superpower: Tenacity and Carnage
5
Inaugural US-Afghanistan-Uzbekistan trilateral meeting held via video link
6
Afghan security institutions reject report half of forces have coronavirus
7
Trumps Considering Full Troop Pullout from Afghanistan
8
Pullout of 8,000 Troops by November Not Only Option: Esper
9
Protests flare across US over police killing of African Americans
10
Afghanistan's Mass Release Of Taliban Prisoners Revives Peace Process, But Seen As 'Big Gamble'