President Ashraf Ghani in a meeting with members of the special forces of the Afghan National Police (ANP) on Monday said his administration cannot remain "indifferent" to those killing children. 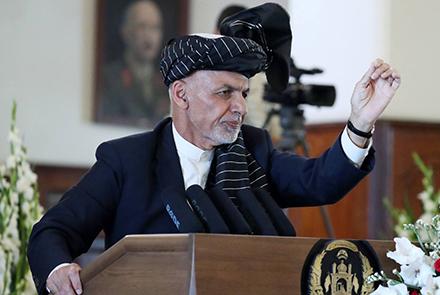 Ghani was apparently referring to last week’s attack on a maternity hospital in Kabul where gunmen massacred at least 24 people, including women and newborn babies.
Ghani also confirmed his stance on the return of the Afghan National Security and Defense Forces (ANDSF) to the "offense" mode, and said that it would be a "great sin" to remain silent against those attacking and killing the children.
He said that recent attacks in Kabul, Nangarhar and Faryab provinces are a "desecration" of the peace process.
“Today we are in a situation where the majority of religious scholars in Afghanistan and scholars from the Islamic world are denouncing the war imposed on us. The Taliban sealed a pact with the international forces, but they continue to attack their people and the nation’s security and defense forces. This cannot be justified,” said Ghani.
But Ghani reiterated that his administration was ready for peace to end the bloodshed in the country.
Ghani also pledged to bring reforms and to invest more in the police force.
“There will be more investment in the national police, particularly in the special forces of police, because we all firmly believe in our people, our country, and Islamic and human values. You will have my all-out support in this respect," added Ghani.
This comes as violence has significantly increased in Afghanistan over the past few weeks, including a recent attack on an NDS facility in Ghazni province which killed several people, including civilians.
The Taliban claimed responsibility for the attack.
Tags:
Ghani Child Killers
Source : Afghan Voice Agency(AVA)
Tuesday 19 May 2020 11:16
Story Code: 210327 Copy text available
Featured news
COVID-19: Three New Hospital to be Built in Kabul for Coronavirus Patients
Peace Talks Ensure Afghanistan not a ‘Safe Harbour’ for Terrorists: US State Department
COVID-19: Food Items Distributed in Afghans’ Camp Provided By China
40 Percent of Factories Halt Operations as Business Declines
US Secretary of State Urges Afghan Gov’t, Taliban to Refrain From Violence After Eid Ceasefire
Assassinations Using Motorcycles Increase in Kabul
1
Findings from Afghanistan war crimes investigation will cause 'distress' for some elite soldiers, judge warns
2
US Envoy Khalilzad Arrives in Kabul for Intra-Afghan Peace Talks
3
Taliban Violence at ‘High Levels’ Can Hurt US-Taliban Peace Deal
4
Ghani Reverses Order to Enlarge Ministry
5
US and Iran attend Six Plus Two meeting on Afghanistan
6
Taliban Chief promises equal rights for men and women in his Eid message
7
Taliban Killed, Wounded 576 Afghan Civilians In 30 Provinces During Ramadan: ONSC
8
‘Key' Taliban Member Arrested in Herat by NDS
9
Airstrike kills 6 Taliban militants a day after similar raids killed 31 in Jawzjan
10
Afghan leaders condole deaths in plane crash in Karachi city of Pakistan