Afghanistan’s flagging peace process was on the verge of collapse following weeks of devastating militant attacks, mounting public anger, and the halt of a major prisoner swap. But a brief cease-fire between the government and the Taliban has breathed new life into efforts to negotiate an end to the nearly 19-year war. 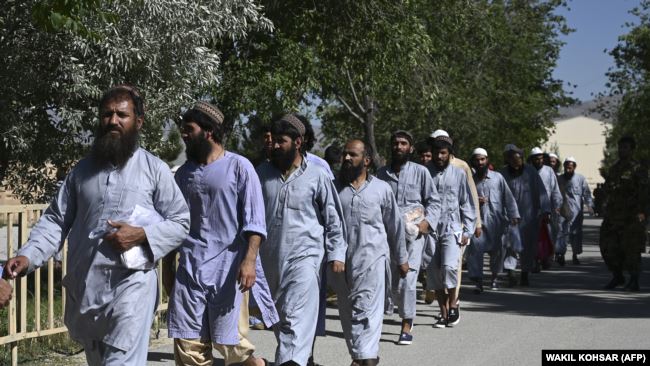 The May 24-26 truce, which coincided with the Eid al-Fitr Islamic holiday, largely held across the country. In what it said was a "goodwill" gesture, the government freed 1,000 Taliban prisoners -- 900 of them in a single day -- the largest group so far.

The developments have raised prospects of an extended cessation of hostilities and the long-delayed launch of direct talks between the government and militants over a permanent cease-fire and a future power-sharing agreement.

The negotiations are a key component of the U.S.-Taliban deal signed in February that called for the complete withdrawal of foreign troops from Afghanistan in exchange for counterterrorism guarantees from the Taliban, which has agreed to open talks with the central government.

But despite the renewed momentum, there are concerns that the government’s unprecedented release of Taliban prisoners is a gamble that could weaken its future leverage in negotiations and give the Taliban an advantage on the battlefield.

“The government is taking a leap of faith, despite significant political and military risks,” said Javid Ahmad, a senior fellow at the Washington-based Atlantic Council. “Many of the Taliban fighters [being] released could pick up their guns again.”

The U.S.-Taliban deal called for the Kabul government, which was not a signatory to the bilateral deal, to free up to 5,000 Taliban prisoners before the start of intra-Afghan talks that were originally slated for March 10. The Taliban committed to releasing 1,000 Afghan officials and security personnel.

The government initially balked but grudgingly accepted, releasing around 1,000 Taliban inmates in separate groups before the truce. The staggered releases were criticized by the Taliban, which demanded that all of the prisoners be freed at once. In total, the government has released some 2,000 Taliban prisoners so far under the U.S.-Taliban deal. The Taliban says it has released 240 Afghan officials and security personnel.

The Taliban prisoners reportedly signed written pledges not to return to the battlefield, although there is no guarantee they will not rejoin the fight.

The government did not reveal the identities or ranks of the latest Taliban militants who were released. It said the first 1,000 were low-rank fighters who had served the majority of their prison terms.

Afghanistan’s Independent Human Rights Commission has expressed concern about the prisoner releases and whether individual Taliban prisoners had been charged with violent crimes against civilian and military targets.

“It's a big gamble for Kabul to release so many prisoners before peace talks even start,” said Michael Kugelman, South Asia senior associate at the Woodrow Wilson International Center for Scholars in Washington.

“Those prisoners are, bar none, the Afghan state's main tool of leverage. If you free too many of them before talks start, then you'll have fewer bargaining chips once the talks do begin,” he said.

Kugelman added that if the Taliban agreed to a new reduction-in-violence agreement or a longer cease-fire, then Kabul might feel that freeing all those prisoners was worth the risk.

“At the end of the day, the Afghan state and the United States believe that it's so much more favorable to go into talks with your enemy when that enemy is scaling down its violence,” he said.

The Taliban has yet to respond to calls by the government to extend the three-day cease-fire.

There are an estimated 10,000 Taliban prisoners being held in Afghanistan. But the militants have said that some of those detained were accused of being sympathizers or members of the group, often to settle old scores, and were never combatants.

According to data from Afghan and Western sources seen by Reuters, the Taliban has mounted more than 4,500 attacks since signing the deal.
On May 12, gunmen massacred 24 people, including two newborns, at a maternity clinic in the capital. Even in a country ravaged by war for more than 40 years, the attack on a maternity clinic targeting infants and mothers sparked international outrage and shocked many Afghans, who fear an endless war.

The government blamed the Islamic State (IS) extremist group and the Taliban, which denied responsibility.

President Ashraf Ghani ordered government forces on the offensive after being in a months-long defensive mode.

His national-security adviser, Hamdullah Mohib, said the escalating attacks illustrated that the Taliban “did not intend to pursue peace” and there “seems little point in continuing to engage the Taliban in ‘peace talks.'" Kugelman said the Taliban’s announcement of a brief cease-fire was a public-relations move.

“The Taliban knows that it's been taking a lot of criticism, and rightly so, from other Afghans and from an international community that is disgusted by all the violence in the country in recent weeks,” he said.