The ISIS Khorasan, the offshoot of the Islamic State of Iraq and Syria (ISIS), claimed responsibility for Kabul bombing which killed two employees of a TV station. 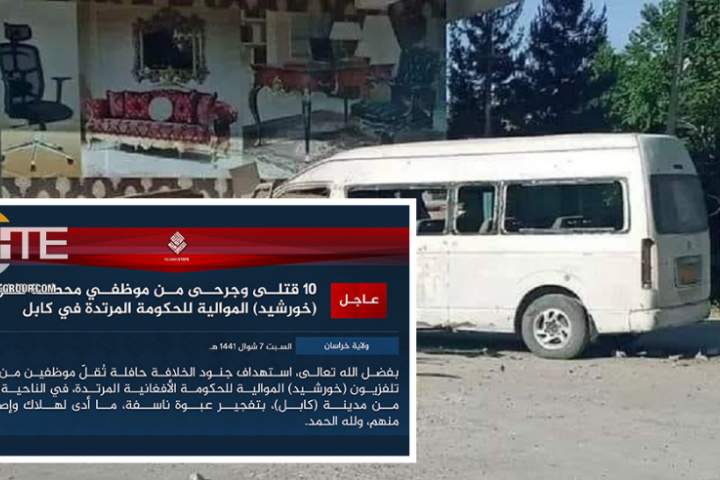 The group issued a statement in Arabic language, claiming responsbility for the attack on a bus carrying the employees of Khurshid TV in Kabul city.
An official in the Ministry of Interior confirmed that the vehicle of Khurshid TV, one of the private TV channels, hit an improvised explosive device at around 4 pm on Saturday.
The official further added that the explosion killed two people, including a reporter and one of the technical workers of the television.
According to the official, the explosion wounded at least six others including one of the employees of the TV channel.
The Taliban group had earlier rejected the militants of the group were involved in the bombing.
“Today’s bomb attack against workers of Khurshid TV in #Kabul city has no relation with the Mujahidin of Islamic Emirate,” Zabiullah Mujahid, a spokesperson for the group said in a Twitter post late on Saturday.
Tags:
ISIS Khorasan claims Kabul bombing which killed 2 employees of a TV station
Source : Afghan Voice Agency(AVA)
Monday 1 June 2020 11:32
Story Code: 211156 Copy text available
Featured news
UAE firm to invest in 3,000 MW solar power project in Afghanistan
Women and children among 10 killed, wounded in Kandahar roadside bomb explosion
Afghanistan, US, Uzbekistan Discuss Trilateral Cooperation
Russia receives orders from 20 countries for ONE BILLION doses of world’s first Covid-19 vaccine
Pompeo Says He Warned Russia Against Offering Bounties for US Soldiers
21 Civilians Killed in 10 Days in Arghistan District of Kandahar: AIHRC
1
Loya Jirga decides that 400 hard-core Taliban prisoners should be released
2
9 members of a single family wounded in Taliban mortar attack in East of Afghanistan
3
US to cut troop levels in Afghanistan
4
Terrorists trained by Pakistani commandos in Afghanistan planning attacks in Kashmir: Report
5
Nabil: Pakistan Is Never Trustworthy
6
U.S. plans to withdraw more than 4,000 troops from Afghanistan by end of November
7
Intra-Afghan Talks to Begin on August 16 in Doha: State TV
8
Pakistan steadfast for inclusive Afghan settlement: FM
9
Taliban expresses readiness to hold peace talks with Afghan govt
10
Khalilzad Expects Prisoners' Release in 'Next Few Days'