The Presidential Palace on Monday said that the appointment of the new cabinet is a priority for the government and that names will be sent to the parliament for approval in the near future--a cabinet that has been apportioned between the two political leaders President Ashraf Ghani and Dr. Abdullah Abdullah. 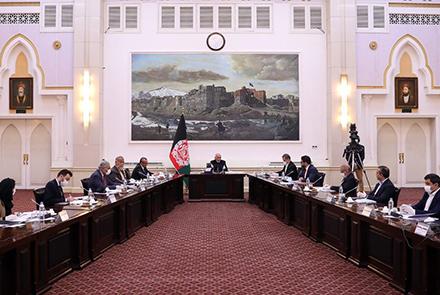 On Sunday, President Ghani appointed Ahmad Jawed Osmani as the acting minister of public health, replacing Ferozuddin Feroz, who served in the post for five years.
“One of the priorities of the Afghan government is to send nominees for cabinet posts for approval to Afghanistan’s parliament. There has been some progress in this respect,” presidential spokesman Sediq Sediqqi said.
Abdullah’s aides said filling their allotted positions in independent directorates has not been finalized, and critics said this should not take up an undue amount of time, considering the other priorities facing the government including the fight against COVID-19 and the peace efforts.
“Politicians have been asked to bring their lists of those eligible for the cabinet, and, of course, those who are eligible will find their way to the cabinet. But the discussion is still underway on some topics--on independent directorates and some other institutions,” Abdullah’s aide Fazl Ahmad Manawi said.
“The inclusive government’s cabinet should be introduced as soon as possible and it should encompass all political parties and movements,” said Shahzada Massoud, a former presidential adviser.
The political rift between President Ghani and Abdullah Abdullah continued for more than two months but they signed a political agreement last month to break the political stalemate and form an inclusive government. Abdullah started his work in the office as the head of the High Council for National Reconciliation on Saturday, May 30.
Tags:
New Cabinet Appointments 'Priority,' Says Palace
Source : Afghan Voice Agency(AVA)
Tuesday 2 June 2020 11:07
Story Code: 211235 Copy text available
Afghan Peace ‘Highest Priority’ For US: Envoy
Leaving Afghanistan is West's priority
Featured news
Lack of accurate statistics undermines public trust: Afghan VP
Pakistani Taliban ‘Adviser’ Among 50 Militants Killed In Kandahar
9 Civilians Killed In Roadside Explosions In Wardak
ANP Nabs 5 Suspects over Multiple Charges
MFA: Pakistan ‘Severely’ Damaging Relations By Firing Rockets Into Kunar
FEFA: Parliament Should Vote For Accountable And Competent Candidates
1
Afghanistan-Bound NATO Supply Convoy Attacked In Northwest Pakistan
2
Al-Qaeda Remains Close to Taliban: UN Official
3
Abdullah: Ghor Attack Runs Counter To Principles Of Peace Talks In Doha
4
Pakistani shelling kills Afghan child, injures four in Kunar
5
Iran declares official termination of UN arms embargo
6
Heavy US Military Equipment Transport Convoy Attacked In Pakistan
7
Abdullah to Visit Iran to Discuss Afghan Peace
8
14 Taliban fighters killed, wounded in Ghor Province
9
Cabinet To Be Introduced To Parliament For Vote Of Confidence
10
300 Taliban fighters killed in Helmand battle: governor