The Taliban is disputing the Afghan government’s figures over the release of the group's figures. 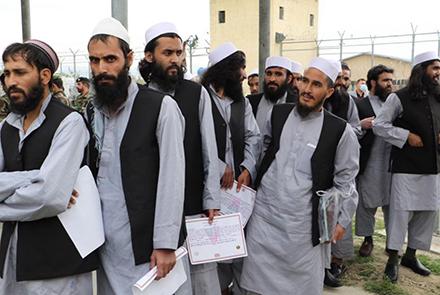 The Afghan government claims to have released 2,710 Taliban, to which the Taliban responded by stating that 426 detainees were released who are not affiliated with the group.
The government did not provide any further details relating to the issue.
The process of releasing Taliban prisoners started at the end of March.
“The Taliban delegation, lead by Mawlawi Zia al-Din, is present, but this issue has become clear for them, because the released prisoners claimed there were people on the list who were criminal prisoners,” said Sayed Akbar Agha, a former Taliban commander.
“We have documents of violations of the release process, and if the Taliban do not accept this process, it will increase the distrust between them and the Afghan people,” said Wahid Farzaye, a lawyer.
Sources close to the Taliban state that the release of all 5,000 Taliban prisoners--based on the group's list given to the Afghan government--will pave the way for talks between Afghans and establish a ceasefire.
“We hope that this opportunity will be used to pave the way for intra-Afghan talks,” said Faiz Mohammad Zaland, a university professor.
Afghan citizens in the country call for the government to monitor the whereabouts of the released prisoners.
“Those without major crimes are not a problem, but the ones who have conducted explosive attacks should not be released," stated Ghulam Hussain, a resident of Kabul.
“The released prisoners should assure the country that they will not strengthen the enemy ranks,” said Nazir Ahmad, another resident of Kabul.
The Taliban say they have so far released 420 Afghan government troops to which the government responded that a number of the people were not government forces.
Tags:
taliban Govt-Released Prisoners
Source : Afghan Voice Agency(AVA)
Tuesday 2 June 2020 11:44
Story Code: 211242 Copy text available
Featured news
Afghanistan: 104 New Cases of COVID-19, 4 Deaths Reported
U.S. Defies Taliban Claim of Violating February Accord
Media watchdog warns of Taliban interference in Ghazni
Pakistan to cooperate with Afghanistan ‘regardless of who is in power’
Religious Scholars Call Current War 'Illegitimate'
‘Regional consensus can drive peace in Afghanistan’
1
Two Romanian soldiers wounded in Kandahar IED explosion
2
Atta Noor asks India to ‘engage with Taliban without giving them legitimacy’
3
Trump says 19 years in Afghanistan enough
4
NATO Presence in Afghanistan Conditions-Based: Stoltenberg
5
Top al-Qaeda leader killed in eastern Afghanistan: Officials
6
Taliban abduct acting district governor in Takhar
7
MFA To Work With Pakistani Embassy To Streamline Visa Process After Jalalabad Stampede
8
Next months decisive for Afghanistan: NATO chief
9
Afghanistan Latest: At Least 30 Killed in Saturday's Blast in Western Kabul
10
Uzbekistan, Afghanistan Sign Cooperative Agreements