Liverpool (AFP) - Liverpool will be crowned champions of England for the first time in 30 years on Thursday should Manchester City fail to beat Chelsea at Stamford Bridge. 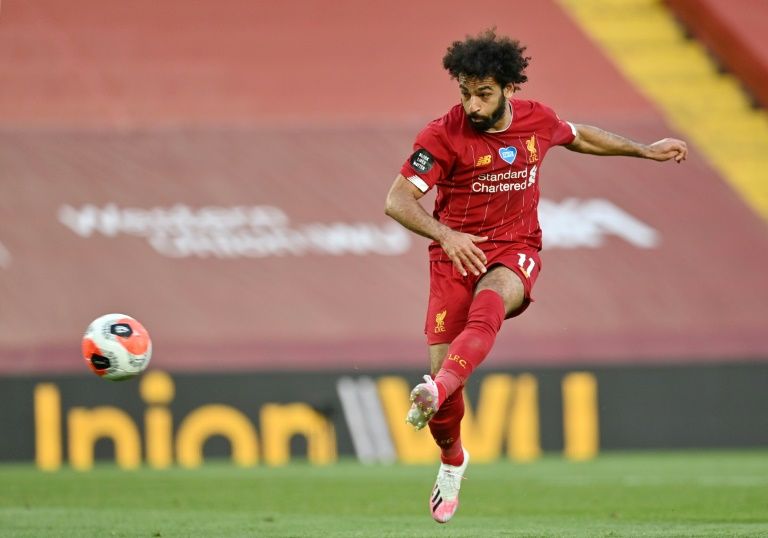 Jurgen Klopp's men moved to the brink of a long-awaited Premier League title in the style that has made them worthy champions-elect by thrashing Crystal Palace 4-0 on their return to Anfield behind closed doors on Wednesday.
Trent Alexander-Arnold, Mohamed Salah, Fabinho and Sadio Mane scored the goals as the Reds opened up a 23-point lead at the top of the table.
Should City keep the title race alive at Chelsea, a point will be good enough for Liverpool to win the league when the top two meet in Manchester on July 2.
"Tonight was a big step, that's clear," said Klopp. "We've all still got to play seven games. If we play like this it's really not nice to play against us."
City boss Pep Guardiola said on Wednesday his priority is Sunday's FA Cup quarter-final rather than prolonging Liverpool's wait and he could rest players for a trip to Newcastle at the weekend.
"Pep should play poker," added Klopp. "They are brilliant, the football they play is unbelievable.
"We are different and we have to be. There are different ways of playing football and I like them both."
Alexander-Arnold opened the floodgates for Liverpool on Wednesday when the right-back curled a sumptuous free-kick beyond the grasp of Wayne Hennessey to settle any nerves on 23 minutes.
The England international admitted many of his teammates will be tuning into events in West London, but wants this Liverpool side to go on and rewrite the record books no matter when they clinch the title.
City set the Premier League points record of 100 two seasons ago, but Klopp's side could still reach 107 with seven games remaining.
"A lot of us will watch it tomorrow but not get too excited," said Alexander-Arnold.
"We've still got to prepare for the game next week regardless. We've still got seven games left I think and we're going to try and get all 21 points from those games."
Before kick-off "You'll Never Walk Alone" boomed around a deserted Anfield, but without the usual accompanying chorus of nearly 55,000 fans.
Instead, banners and flags were draped over The Kop on the night Liverpool could have clinched the title had they won the Merseyside derby on Sunday.
"Imagine if this stadium would have been full today and all the people could have experienced it live," said Klopp. "I don't think the game could have been better because my boys played like everybody was in the stadium."
From the start, Liverpool looked far sharper than in that goalless draw at Everton in their first match for three months.
"There was a lot more rhythm and fluency than Sunday," said Alexander-Arnold. "Today we've come out, started fast and didn't really put a foot wrong in the whole game. It will go down as one of our best performances of the season."
Salah showed a clinical touch to net his 21st goal of the season from Fabinho's ball over the top to make it 2-0 just before half-time.
Liverpool's long wait for a title has been extended by three months due to the unprecedented coronavirus shutdown.
That wait could take just one more day, another week or slightly longer should City show their pride to win the battle of the top two next week.
However, there remains no doubt the title drought is coming to an end and Wednesday's dominant display underlined why they will be champions.
Fabinho's piledriver set the seal on a 23rd straight league win at Anfield as the Brazilian drilled home from fully 30 yards.
The front three of Salah, Roberto Firmino and Mane have been key to Liverpool's rise over the past three years from struggling just to qualify for the Champions League to winning that competition last season and now running away with the English top-flight.
All three combined beautifully for the fourth 20 minutes from time as Firmino fed Salah, whose pass picked out the run of Mane and the Senegalese slotted into the far corner.
Tags:
Liverpool wait on Man City slip-up to clinch long-awaited title
Source : Afghan Voice Agency(AVA)
Thursday 25 June 2020 14:21
Story Code: 212935 Copy text available
Featured news
Trump: US Troops 'Probably' Down to 4,000-5,000 by Election Day
Afghanistan Calls On Turkey To Take Action Against People Who Unfurled Taliban Flag
COVID-19 Latest: 36 of 187 Cases Test Positive in Afghanistan
75 More Afghan Sikhs And Hindus Returning To India
Foreign Ministry To Host Regional, International Meetings On Peace Process
Air Arabia Abu Dhabi Announces Flights Kabul
1
Football: Arsenal Wins FA Cup After Beating Chelsea