Khalilzad Begins New Round Of Visits For Afghan Peace Process

U.S. Special Representative for Afghanistan Reconciliation Zalmay Khalilzad will be visiting Qatar, Pakistan and Uzbekistan, in his new round of travel to start the intra-Afghan peace talks, a statement said on Sunday. 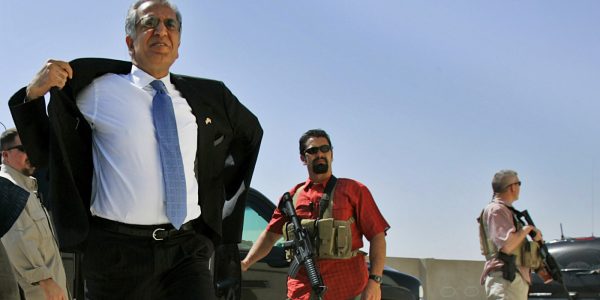 The U.S. State Department said Khalilzad will be touching down in Doha first, followed by Islamabad and then Tashkent to “urge support for all Afghans to meet their remaining commitments ahead of intra-Afghan negotiations” especially with regard to the reduced violence and timely prisoner release between the government and the Taliban.
Khalilzad is joined on this trip by U.S. International Development Finance Corporation (DFC) CEO Adam Boehler and his team.
“Afghan peace, economic growth, and regional connectivity are closely linked and mutually supportive,” the statement said.
The delegation will explore investment opportunities and partnerships in a range of sectors to advance the economic recovery of Afghanistan and support sustained peace and stability in the region.
Due to the challenges of travel during the COVID-19 pandemic, the American delegation will also conduct meetings with Afghan officials throughout the trip remotely via video.
This news comes even as Afghanistan sees a surge of violence due to which President Ashraf Ghani also called on the Taliban to end the violence and start the intra-Afghan talks on Saturday.
“Referring to the increased violence by the Taliban, the President stressed the need for an end to the violence to help kick start intra-Afghan talks as soon as possible,” the Presidential Palace said in their statement.
Media sources have claimed that fights between the Taliban and Afghan security forces are going on in at least 15 out of 34 provinces with clashes in Balkh, Daykundi, Faryab, Ghazni, Ghor, Helmand, Jawzjan, Kandahar, Kunduz, Nangarhar, Paktia, Takhar, Uruzgan and Zabul reported on Sunday.
Over the last three days, more than 100 casualties – including the Afghan security forces, Taliban, government officials and civilians – were reported in the past three days.
Tags:
Zalmay Khalilzad
Source : Afghan Voice Agency(AVA)
Monday 29 June 2020 10:29
Story Code: 213241 Copy text available
Featured news
UAE firm to invest in 3,000 MW solar power project in Afghanistan
Women and children among 10 killed, wounded in Kandahar roadside bomb explosion
Afghanistan, US, Uzbekistan Discuss Trilateral Cooperation
Russia receives orders from 20 countries for ONE BILLION doses of world’s first Covid-19 vaccine
Pompeo Says He Warned Russia Against Offering Bounties for US Soldiers
21 Civilians Killed in 10 Days in Arghistan District of Kandahar: AIHRC
1
Loya Jirga decides that 400 hard-core Taliban prisoners should be released
2
9 members of a single family wounded in Taliban mortar attack in East of Afghanistan
3
US to cut troop levels in Afghanistan
4
Terrorists trained by Pakistani commandos in Afghanistan planning attacks in Kashmir: Report
5
Nabil: Pakistan Is Never Trustworthy
6
U.S. plans to withdraw more than 4,000 troops from Afghanistan by end of November
7
Intra-Afghan Talks to Begin on August 16 in Doha: State TV
8
Pakistan steadfast for inclusive Afghan settlement: FM
9
Taliban expresses readiness to hold peace talks with Afghan govt
10
Khalilzad Expects Prisoners' Release in 'Next Few Days'