Russia Engaged in Afghanistan is Nothing New: Pompeo

US Secretary of State Mike Pompeo on Wednesday, in remarks to the press on the reports of the Russian bounties for Taliban fighters who kill Americans, said: "The fact that the Russians are engaged in Afghanistan in a way that's adverse to the United States is nothing new." 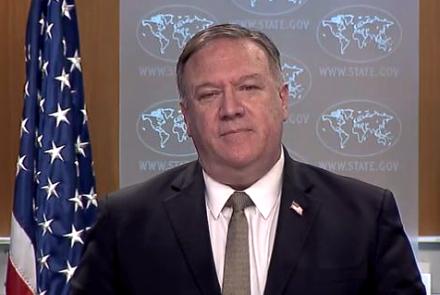 “Some members of Congress who are out there today suggesting that they are shocked and appalled by this, they saw the same intelligence that we saw. So it would be interesting to ask them what they did when they saw whatever intelligence it is that they are referring to,” Pompeo said.
“They would have had access to this information as well – not just the intelligence committees, by the way – even more broadly than that,” he said.
Pompeo also said that US President Donald Trump has been consistently aware of the challenges that Russia presents to tge US and he is aware of the risk in Afghanistan.
“It’s why we have spent so much time over this past year at the president’s direction to reduce risk to our forces in Afghanistan in a way no previous administration has done. We’ve set about a peace and reconciliation plan inside of – and by the way, as part of that, we’ve talked to the Russians about how we can reduce the risk of violence from the Taliban to Americans on the ground in Afghanistan,” he said.
“No, we’ve taken the threat and the President’s taken the threat to our forces in Afghanistan incredibly serious throughout the entire duration of this administration,” he added.
Pompeo believes that the “Russians have been selling small arms that have put Americans at risk there for 10 years. We have objected to it. To your point, when I meet with my Russian counterparts, I talk with them about this each time: “Stop this.” We think we have a not perfect but somewhat overlapping objective in Afghanistan. It’s on their doorstep. We know they were routed in Afghanistan, right.”
“But it’s – just so everybody can be level set, money flowing to Afghanistan to support the Taliban has been going on since we went to Afghanistan now almost two decades ago. It’s not just the Russians. Indeed, probably not majority are the Russians,” Pompeo said.
“Money has flowed from lots of places – from Iran. Even today the Iranians continue to undermine what we’re trying to accomplish in terms of peace and reconciliation in Afghanistan. And it’s incredibly important that you take in context how it is this reporting has developed and how it is the United States has responded to this. We do everything we can, and this president has been vicious in securing American freedom and protecting American soldiers,” he added.
According to a New York Times article citing three anonymous American officials, US intelligence monitored electronic data showing large financial transfers from a bank account controlled by Russia’s military intelligence agency to a Taliban-linked account, which the Times offers as evidence potentially supporting allegations that Russia covertly offered bounties for killing US and coalition troops in Afghanistan.
The Taliban and Russia have rejected the allegations.
Trump said on Wednesday he was not told about a reported Russian effort to get the Taliban to kill US soldiers because many US intelligence officials doubted its veracity, a stance contradicted by four US and European sources and by its inclusion in a widely read CIA report in May, Reuters reported.
“We never heard about it because intelligence never found it to be of that level,” he told Fox Business Network. “The intelligence people... many of them didn’t believe it happened at all.”
House of Representatives Speaker Nancy Pelosi, the top Democrat in Congress, said the United States must immediately impose sanctions on Russia.
The White House said Pelosi and other congressional leaders will receive a briefing on Thursday.
Tags:
Pompeo
Source : Afghan Voice Agency(AVA)
Thursday 2 July 2020 09:47
Story Code: 213516 Copy text available
Featured news
MoPH Survey Finds 10 Million People Infected With COVID-19 In Afghanistan
Afghan Imports To Pakistan See 28.53% Decrease In FY 2019-20
Afghan forces arrest top ISIS leader in Kunar province
Power Exports From Iran Resumed After Repairs
Salaries Of 197 High-Ranking Officials, Employees Suspended Due To Non-Registration Of Assets
Indian doctor detonated car bomb in deadly attack targeting jail in East of Afghanistan
1
MoI: Taliban Violated Eid Ceasefire And Killed 20 Civilians
2
Afghanistan Calls On Turkey To Take Action Against People Who Unfurled Taliban Flag
3
SIGAR: Taliban ‘Harassing’ ANDSF, Al Qaeda Still Present
4
Afghan NDS Kills Daesh Intelligence Head in East
5
Kabul Delegation in Kandahar to Probe Spin Boldak Clash
6
Afghanistan saw 'deadliest' week in 19 years last month: SIGAR report
7
SIGAR: Humanitarian Disaster Looms In Afghanistan With One Of The Highest Positive Rates In The World
8
Jalalabad Prison Secured, Fighting Continues in Nearby Building
9
SIGAR: Up to 70% ‘Ghost Soldiers’ Within ANDSF Ranks
10
Developing: 13 Civilians Killed, 42 Wounded As Clashes Continue In Jalalabad Prison After 14 Hours