Experts and cave divers in Mexico's Yucatan peninsula have found ocher mines that are some of the oldest on the continent, which may also explain why skeletons were later found in the now-submerged labyrinth, sinkhole caves. 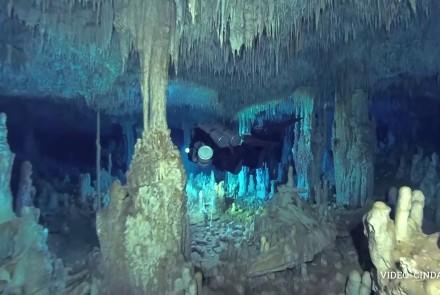 According to the Research Center for the Aquifer System of Quintana Roo, known as CINDAQ for its initials in Spanish, the mines contain some of the best-preserved evidence of the earliest inhabitants of the Western hemisphere.
"This is incredibly rare in archaeology, evidence of human activity that's this old and this well preserved", said Brandi MacDonald, Researcher fo the University of Missouri.
The discovery of human-set fires, stacked mining debris, simple stone tools, navigational aids, and digging sites suggest humans went into the caves around 10,000 to 12,000 BC.
These inhabitants explored the caves seeking iron-rich red ocher, which early peoples in the Americas prized for decoration and rituals.
Since skeletal remains like "Naia," the young woman who died 13,000 years ago, were found over the last 15 years, archaeologists have wondered how they wound up in the then-dry caves.
About 8,000 years ago, rising sea levels flooded the caves, known as cenotes, around the Caribbean coast resort of Tulum.
Tags:
Underwater Cave with Ancient Human Artifacts
Source : Afghan Voice Agency(AVA)
Saturday 4 July 2020 11:41
Story Code: 213642 Copy text available
Featured news
UAE firm to invest in 3,000 MW solar power project in Afghanistan
Women and children among 10 killed, wounded in Kandahar roadside bomb explosion
Afghanistan, US, Uzbekistan Discuss Trilateral Cooperation
Russia receives orders from 20 countries for ONE BILLION doses of world’s first Covid-19 vaccine
Pompeo Says He Warned Russia Against Offering Bounties for US Soldiers
21 Civilians Killed in 10 Days in Arghistan District of Kandahar: AIHRC