The Haqqani Network and the failing US-Taliban deal

While the Afghan government has begun the release of Taliban prisoners and the US prepares for a drawdown in troop numbers, the Taliban’s ties to the Haqqani Network and al-Qaeda remain stronger than ever. 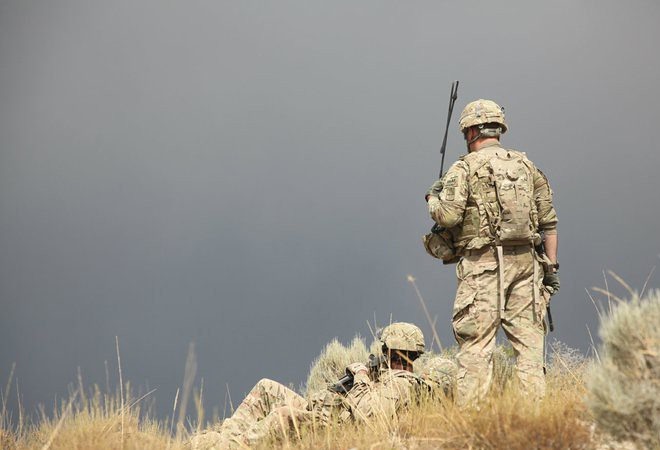 It has been nearly four months since the United States and the Taliban signed the ‘Agreement for Bringing Peace to Afghanistan’ and since then there has not been any consensus on how to bring about that peace. While the Afghan government’s negotiating team prepares to sits down, for the first time with the Taliban in the coming weeks, violence in the country continues with daily attacks, bombings and killings targeting Afghan civilians and security forces. Despite the continuing carnage and bloodshed, something far deadlier, brews below the surface, as the Taliban, the Haqqani Network, al-Qaeda and the Islamic State erase logistical boundaries between their organisations. Despite certain ideological differences these terrorist groups, they enjoy the fruits of overlapping loyalties, shared military commanders, patronage of the Pakistani state and a deal with the US that allows them to get away with murder.
Under their deal with the US, the Taliban agreed to, no longer attack US forces and sever ties with al-Qaeda and other groups that threaten the security of the US. This was in return for a steady US withdrawal from the country and the release of up to a thousand Taliban prisoners from Afghan prisons. While the Afghan government has begun the release of Taliban prisoners and the US prepares for a drawdown in troop numbers, the Taliban’s ties to the Haqqani Network and al-Qaeda remain stronger than ever.

Despite the continuing carnage and bloodshed, something far deadlier, brews below the surface, as the Taliban, the Haqqani Network, al-Qaeda and the Islamic State erase logistical boundaries between their organisations.
The Haqqanis, the Taliban and al-Qaeda share a long history of being allies, rooted in their close ties to Pakistan’s Inter-Services Intelligence (ISI) and militant-criminal activities.
Over the decades, Haqqani Network has forged relationships with a wide variety of jihadist groups, even those that are ideologically or politically different from one another. It has supported groups such as the Tehreek-e-Taliban Pakistan (TTP), Islamic Movement of Uzbekistan (IMU) and Lashkar-e-Taiba (LeT), providing them with tactical assistance, fighters and logistical aid when needed. The Pakistani army considers the group as armed allies, with whom they can partner to pursue their strategic objectives vis-à-vis Kabul and New Delhi. It has consistently provided the group with aid and sanctuary and protected them during military offensives against other groups.
The failure of Washington to split-up the Taliban and Haqqani Network, complicates their withdrawal and peace in Afghanistan. It has allowed the Taliban to rebrand themselves as a legitimate political entity, one that can kill Afghans, while simultaneously justifying their importance and validity to Washington. This has been visible in the months following the US-Taliban deal. In March, an attack on a gurudwara in Kabul killed 27 people. Afghan intelligence arrested Islam Farooqi, a Pakistani national, with known links to LeT and TTP, for the attack. In May, a suicide blast during a funeral ceremony in Nangarhar killed twenty-four people, with the Islamic State claiming responsibility. On the same day in Kabul, terrorists stormed a maternity hospital killing sixteen people, including pregnant women and new born babies. While these horrific attacks stand out in their brutality, other violent incidents have continued in intensity and frequency nearly daily, with attacks across the country involving bombings, check-post overruns and killing of Afghan soldiers.

The failure of Washington to split-up the Taliban and Haqqani Network, complicates their withdrawal and peace in Afghanistan.
It doesn’t matter whether the Taliban publicly claims these attacks or not. In the end, they all link back to group and the militant nexus it remains embroiled in. Since 2015, Sirajuddin Haqqani has been the deputy leader of the Taliban, assisting the group in its military and extremist activities. Around twenty per cent of the Taliban’s fighting force comes from the Haqqani Network, who recruits and trains them in Pakistan. On the political front, the Haqqani’s have worked hard to ensure that the Taliban received the best deal they could with the US, with Siraj Haqqani authoring a New York Times opinion piece, titled ‘What We, the Taliban, Want’ where he laid out the Taliban’s demands. The Haqqani Network hopes that the Taliban are in a strong bargaining position when it comes to negotiations with Kabul, that will in turn put them and the ISI in the best possible position vis-à-vis their desired outcome in Afghanistan, which is, politically and military entrenched.
UN reports state that the Taliban’s military hardliners, have set in motion, strategic alliances with non-Taliban groups that allow them to continue disrupting the peace in Afghanistan. The Haqqani Network has begun the process of partnering with the Islamic State Khorasan, providing technical assistance to carry out attacks, such as the attack on the Kabul gurduwara in March. While the Islamic State have been at odds with the Taliban, their growing partnership with the Haqqani Network, has been fruitful for the group, allowing them to launch attacks for which they lack capability on their own. If an operation, carried out by the Haqqani Network, results in civilian casualties, the Taliban can deny responsibility, while the Islamic State can claim it, allowing them to demonstrate their capability and relevance.

While the Islamic State have been at odds with the Taliban, their growing partnership with the Haqqani Network, has been fruitful for the group, allowing them to launch attacks for which they lack capability on their own.
While their deal with the US explicitly they must, the Taliban have not shown any signs of cutting ties with al-Qaeda. In April 2020, the Taliban’s official website released a statement on the seventh death anniversary of Mullah Omar, praising his support for AQ against the US invasion in 2001. Relations between the two groups remains close, with the Taliban leadership even consulting with al-Qaeda during its negotiations with the US, holding meetings over the course of 2019 and early 2020. Reports state that al-Qaeda continues to have armed operatives aligned with the Taliban and the Haqqani Network, with the groups discussing cooperation related to planning, training and provision of safe havens for al-Qaeda members in Afghanistan. The latest UN report also states that, discussions held among senior members of the Haqqani Network led to the formation of a new until of 2,000 fighters funded by al-Qaeda that would split into two operational zones in the country. While the Taliban may publicly deny their relationship with the al-Qaeda and attempt to keep it undercover, the complex relationship between the two groups has always been based on conditions of legitimacy and identity, with neither group able to abandon the other without also threatening their own identity as a group based on fundamentalist Islam.
As long as the US continues to view the Haqqani Network as a military actor and a criminal syndicate and fails to take into serious consideration its political adaptation tactics, it will further fail in Afghanistan. The group now wields unprecedented power and influence in Afghanistan and as it continues to forge alliances across state boundaries and ideological lines, co-opting transactional allies, any deal between the Taliban and the US, remains just a piece of paper that will not deliver peace.
Source : Afghan Voice Agency(AVA)
Sunday 5 July 2020 10:16
Story Code: 213729 Copy text available
Featured news
Intra-Afghan Talks to Begin on August 16 in Doha: State TV
1 Killed, 2 Wounded in Kabul Magnetic Mine Blast
Afghanistan-Iran-Uzbekistan Transit Corridor Operational
Taliban expresses readiness to hold peace talks with Afghan govt
29% Increase in Afghanistan’s Exports through Air Corridor
Afghan negotiating team to leave for Doha Wednesday, talks to begin Sunday
1
Loya Jirga decides that 400 hard-core Taliban prisoners should be released
2
Zarif criticizes Google for ‘glitch’ in translation of condolences to Lebanese
3
US cargo plane lands in Israel in support of the regime's Iron Dome
4
9 members of a single family wounded in Taliban mortar attack in East of Afghanistan
5
U.S. plans to withdraw more than 4,000 troops from Afghanistan by end of November
6
US to cut troop levels in Afghanistan
7
Nabil: Pakistan Is Never Trustworthy
8
Terrorists trained by Pakistani commandos in Afghanistan planning attacks in Kashmir: Report
9
Pakistan steadfast for inclusive Afghan settlement: FM
10
Khalilzad Expects Prisoners' Release in 'Next Few Days'