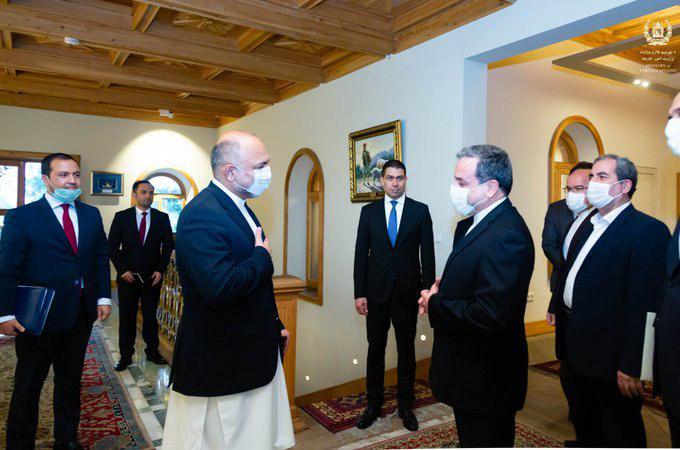 The meeting between the two ministers took place on Wednesday evening, the Afghan Ministry of Foreign Affairs said on Thursday.
The high-level delegation from Iran will be participating in the joint meetings of the Economic-Transit and Defence-Security Committees, following up on the decisions made during the Afghan diplomatic visit to Tehran.

The two sides are expected to discuss the finalization of the agreement regulating the employment and stay of Afghan workers to Iran and the renewal of the border commissioners’ contracts in accordance with their joint border cooperation.
The Afghan side handed over a draft to Iran for discussion, follow-up and regulations of measures to prevent the recurrence of accidents and illegal trafficking on the borders, as well as to legalize the presence of Afghan citizens in Iran.
The Iranian minister, while expressing his government’s readiness to expand relations between the two countries, assured Atmar that he would follow up on the agreements and decisions reached during the Afghan delegation’s visit.
Tags:
Atmar Meets High-Ranking Iranian Delegation In Kabul To Discuss Bilateral Ties
Source : Afghan Voce Agency(AVA)
Thursday 16 July 2020 12:41
Story Code: 214698 Copy text available
Featured news
UAE firm to invest in 3,000 MW solar power project in Afghanistan
Women and children among 10 killed, wounded in Kandahar roadside bomb explosion
Afghanistan, US, Uzbekistan Discuss Trilateral Cooperation
Russia receives orders from 20 countries for ONE BILLION doses of world’s first Covid-19 vaccine
Pompeo Says He Warned Russia Against Offering Bounties for US Soldiers
21 Civilians Killed in 10 Days in Arghistan District of Kandahar: AIHRC
1
Loya Jirga decides that 400 hard-core Taliban prisoners should be released
2
9 members of a single family wounded in Taliban mortar attack in East of Afghanistan
3
US to cut troop levels in Afghanistan
4
Terrorists trained by Pakistani commandos in Afghanistan planning attacks in Kashmir: Report
5
Nabil: Pakistan Is Never Trustworthy
6
U.S. plans to withdraw more than 4,000 troops from Afghanistan by end of November
7
Intra-Afghan Talks to Begin on August 16 in Doha: State TV
8
Pakistan steadfast for inclusive Afghan settlement: FM
9
Taliban expresses readiness to hold peace talks with Afghan govt
10
Khalilzad Expects Prisoners' Release in 'Next Few Days'