Taliban not living up to commitments: US general

The Taliban has not kept up their commitments agreed to in their deal with the United States, a top American general has said. 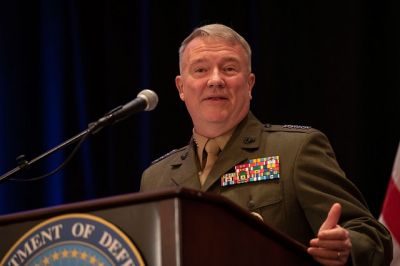 “While the Taliban have been scrupulous about not attacking U.S. or coalition forces, in fact, the violence against the Afghans is higher than it's been in quite a while,” General Kenneth McKenzie, chief of US Central Command, said in an interview with Voice of America.
He said before there could be a greatly reduced US presence in Afghanistan, intra-Afghan talks are needed needed to start and the US would need to be assured that the Taliban would not host Islamic State (ISIS) and al-Qaida terrorist groups, potentially allowing them to carry out attacks on the West.
“Right now it is simply unclear to me that the Taliban has taken any positive steps in that, in those areas,” McKenzie said.
The general said that Taliban still have time to change. “I don't know that they will. I don't know that they won’t. I do know that we're going to watch very closely. It will be indicated by actions that they take,” he said.
Meanwhile, US Secretary of State Mike Pompeo said on Wednesday that report of Russian bounty to kill US troops in Afghanistan doesn’t reflect accurately on what has transpired.
He, however, said Russia has used proxies in Afghanistan and US has responded to threats.
“We have done everything we can to make sure we had the intelligence collection collected appropriately, that we have responded to those threats of outside actors whether it was Iranians, the Russians, the Pakistanis, or other outside non-state actors who were funding and underwriting the Taliban putting Americans at risk,” Pompeo said.
Tags:
Taliban not living up to commitments: US general
Source : Afghan Voce Agency(AVA)
Thursday 16 July 2020 16:09
Story Code: 214717 Copy text available
Taliban to face a very long winter, says US General
Afghan Air Force size to be tripled by 2023, says US General
NATO rejects Taliban claim regarding the killing of US general and troops in Kunduz
Taliban meet with US general amid tensions over peace deal
Top Middle East US general visits Abu Dhabi
Featured news
UAE firm to invest in 3,000 MW solar power project in Afghanistan
Women and children among 10 killed, wounded in Kandahar roadside bomb explosion
Afghanistan, US, Uzbekistan Discuss Trilateral Cooperation
Russia receives orders from 20 countries for ONE BILLION doses of world’s first Covid-19 vaccine
Pompeo Says He Warned Russia Against Offering Bounties for US Soldiers
21 Civilians Killed in 10 Days in Arghistan District of Kandahar: AIHRC
1
Loya Jirga decides that 400 hard-core Taliban prisoners should be released
2
9 members of a single family wounded in Taliban mortar attack in East of Afghanistan
3
US to cut troop levels in Afghanistan
4
Terrorists trained by Pakistani commandos in Afghanistan planning attacks in Kashmir: Report
5
Nabil: Pakistan Is Never Trustworthy
6
U.S. plans to withdraw more than 4,000 troops from Afghanistan by end of November
7
Intra-Afghan Talks to Begin on August 16 in Doha: State TV
8
Pakistan steadfast for inclusive Afghan settlement: FM
9
Taliban expresses readiness to hold peace talks with Afghan govt
10
Khalilzad Expects Prisoners' Release in 'Next Few Days'