The US will reduce its military presence in Afghanistan to about 4,000 troops "very soon", said President Donald Trump, in an interview with Axios on HBO. 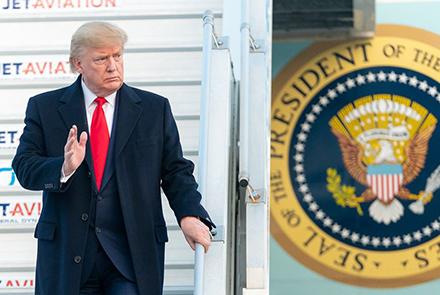 "We are largely out of Afghanistan," Trump said in an interview with the news website Axios which was filmed on Tuesday, July 28 and aired Monday, Aug. 3 on HBO.
"We'll be down in a very short period of time to 8,000, then we're going to be down to 4,000, we're negotiating right now," Trump said.
However, he did not specify the exact time.
Trump was asked about how many US troops will remain in Afghanistan on election day in November. He said that it would be "probably anywhere from four to five thousand."
The US-Taliban agreement signed on February 29 calls for the US to withdraw troops from Afghanistan and it also called for the Afghan government to free 5,000 Taliban prisoners in return for the Taliban's release of up to 1,000 government detainees.
The Taliban has released around 1,000 detainees.
The Afghan government, under US pressure, has freed around 4,600 Taliban prisoners in accordance with a list provided by the Taliban, but has balked at releasing the remaining 400 prisoners on the list, saying these detainees have committed serious crimes.
The Afghan government is convening the consultative a Loya Jirga, the grand assembly of Afghan elders and representatives, to find a consensus on the decision to release these 400 Taliban prisoners, who are accused of crimes including murder, drug trafficking and abduction, a senior government official said on Monday.
At least 3,200 people will attend the Jirga, according to presidential spokesman Sediq Sediqqi, who held a press conference in Kabul on Monday.
A Taliban spokesman in Qatar, Suhail Shaheen, recently said that convening the Jirga to decide the release of the 400 prisoners meant the continuation of the war.
Tags:
Trump: US Troops 'Probably' Down to 4,000-5,000 by Election Day
Source : Afghan Voice Agency(AVA)
Tuesday 4 August 2020 14:04
Story Code: 216079 Copy text available
COVID-19: Number of Patients Exceeds 25,000 Mark
Russia's coronavirus cases pass 485,000
USAID steps in to help WFP feed 95,000 desperate Afghan families
Afghan COVID-19 Cases Cross 35,000 With Testing Rates Decreasing Again
COVID-19: Afghanistan Nears 35,000 Cases
Featured news
Rahmani Praises Top 3 Passers of National University Entrance Exam
Ghani: Customs Recruitments should be Independent
EU Envoys Stress On Urgent Need For Comprehensive Ceasefire In Afghanistan
Daudzai: Pakistan Showing They Are Serious About Support For The Peace Process
Afghanistan thanks Pakistan for facilitating Afghan peace process
COVID-19: 6 New Cases Reported From 224 Samples Tested
1
Afghan, Pak Officials Discuss Abdullah’s Upcoming Pakistan Trip
2
Political Deputy spoke at the Ministerial Meeting of Foreign Ministers of Landlocked Developing Countries on the sidelines of #UNGA