Much anticipated negotiations between Afghanistan’s warring parties are likely to be “contentious,” U.S. Secretary of State Mike Pompeo warned Friday, but are the only way forward if Afghans are to find peace after decades of relentless conflict. 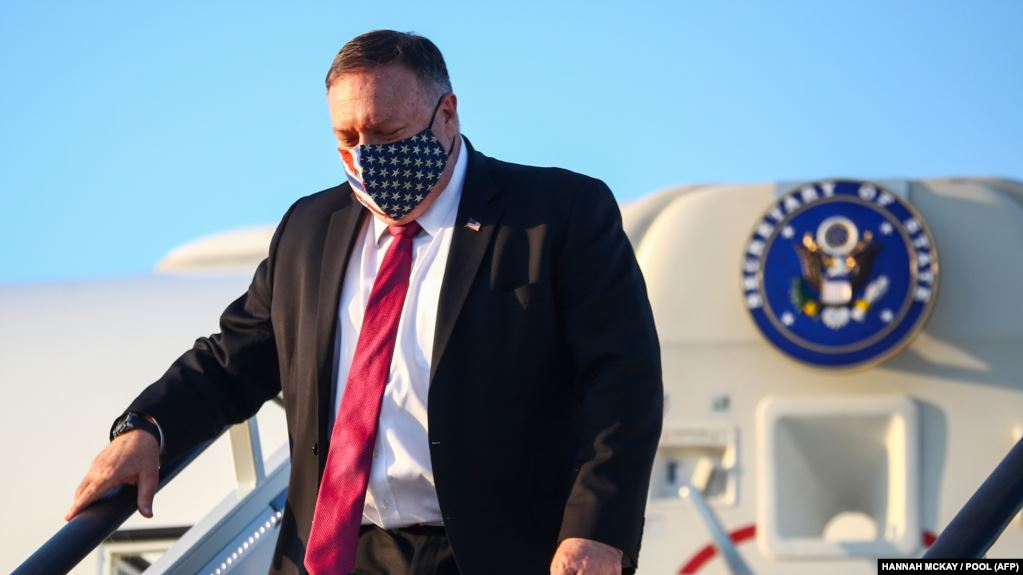 Pompeo made his comments en route to the Middle Eastern State of Qatar, where intra-Afghan negotiations are to begin Saturday, a day mostly reserved for ceremony before the hard task of hammering out a road map for a post-war Afghanistan begins.
The negotiations were laid out in a peace deal Washington brokered with the Taliban and signed in Doha on Feb. 29 aimed at ending the war and bringing U.S. troops home ending America’s longest conflict. “We expect Saturday morning, for the first time in almost two decades, to have the Afghans sitting at the table together prepared to have what will be contentious discussions about how to move their country forward to reduce violence and deliver what the Afghan people are demanding — a reconciled Afghanistan with a government that reflects a country that isn’t at war,” Pompeo said on the plane taking him to Doha.
President Donald Trump made the withdrawal of U.S. troops from Afghanistan a promise before the 2016 presidential election. In the countdown to this November’s presidential polls, Washington has ramped up pressure to start intra-Afghan negotiations.
At a news conference Thursday, Trump called the talks “exciting” and said Washington expected to be down to 4,000 troops by November. Even though delays have plagued the start of talks, Washington began withdrawing some of its 13,000 troops after the Feb. 29 deal was signed.
Withdrawal of the remaining troops does not hinge on the success of intra-Afghan negotiations but rather the commitment made by the Taliban in the deal to fight terrorists groups that could threaten the U.S. and its allies.
U.N. envoy to Afghanistan Deborah Lyons called the talks possibly “the start of something truly momentous.” She called for a reduction of violence as Afghanistan waits to reach a permanent cease-fire.
Pompeo in his comments made it clear the U.S. was ready to return soldiers to Afghanistan if it saw a threat emerging and the Taliban reneged on their commitments. The White House and its peace envoy Zalmay Khalilzad have refused to give specifics on commitments made by the Taliban, citing security concerns.
“Our commitment to reduce our forces to zero is conditioned on them executing their obligations under the agreement (which is) so very clear about their responsibilities with respect to terrorist activity taking place in Afghanistan,” Pompeo said. But Pompeo warned of spoilers to peace, citing recent targeted killings in Afghanistan and an attempted assassination earlier this week of Afghan vice-president Amrullah Saleh.
“It’s very clear that the violence levels have to come down to acceptable levels,” he said.
The Afghan delegation left the capital late Friday afternoon for Doha and it included Abdullah Abdullah, who heads the High Council for National Reconciliation, the powerful umbrella group that will oversee the negotiation team headed by former intelligence chief Mohammed Masoom Stanikzai. Abdullah’s appointment to head the council was part of a power sharing deal with Afghan President Ashraf Ghani, ending a dispute over results of the controversial presidential election the year before.
A Taliban official, speaking on condition of anonymity because he was not authorized to address the media, said Friday that a final six prisoners held by the Kabul government arrived late Thursday in Doha. The six were among 5,000 Taliban prisoner the U.S. peace deal called on the Afghan government to free before the start of negotiations. The Taliban were required to free 1,000 government and military personnel.
Prisoner releases were a big reason for a delay in the start of talks and the last six were believed to have been held because both Australia and France balked at their release. Their arrival in Doha clears a final hurdle to the start of talks.
Even as Afghans prepared for negotiations, the violence continued Friday.
At least two civilians and two soldiers were killed by a bomb hidden on a motorcycle in eastern Khost province, a Defense Ministry statement said. The bomb exploded near a wedding.
Separately, six Afghan soldiers were killed when their outpost in eastern Afghanistan was targeted , a second ministry statement said.
No one took immediate responsibility for the attacks, though both Taliban and the Islamic State affiliate are active in eastern Afghanistan. The IS affiliate headquarters is in eastern Nagarhar province.
Although no U.S. or NATO soldiers have died since the signing of the U.S. deal with the Taliban, relentless attacks have been staged against Afghan military outposts killing scores of Afghan soldiers.
The Taliban have also charged that Taliban prisoners freed by the government have been attacked as they returned home and others were attacked in their homes.
Tags:
Pompeo says Afghan negotiations likely to be ‘contentious’
Source : Afghan Voce Agency(AVA)
Friday 11 September 2020 19:18
Story Code: 218609 Copy text available
Featured news
Trump says 19 years in Afghanistan enough
With Increased Crop Yields, Harvest Festival Celebration Held In Bamiyan
Brazil's COVID vaccine volunteer dies, tests to continue
Afghan-Pakistan Customs Officials, Traders Meet At Torkham
Two Romanian soldiers wounded in Kandahar IED explosion
COVID-19: 116 New Cases Reported From 440 Samples
1
Pakistani shelling kills Afghan child, injures four in Kunar
2
Afghan district governor killed in ambush
3
Al-Qaeda Remains Close to Taliban: UN Official
4
Abdullah to Visit Iran to Discuss Afghan Peace
5
Iran declares official termination of UN arms embargo
6
Abdullah: Ghor Attack Runs Counter To Principles Of Peace Talks In Doha
7
14 Taliban fighters killed, wounded in Ghor Province
8
Cabinet To Be Introduced To Parliament For Vote Of Confidence
9
Pompeo warns of sanctions for arms sales to Iran despite ban lifting
10
Rouhani: Iran Supports Sustainable Peace, Stability In Brotherly Afghanistan